When 12-year-old schoolboy Martin Nefdt was dropped off for a haircut near the Westbourne Oval in Port Elizabeth one Saturday morning, he had no idea his life was about to change. 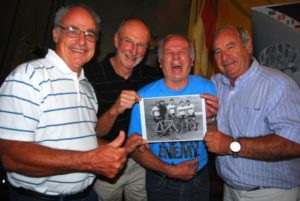 Walking past the gate, he glimpsed something whizzing past. “I looked back and there the cyclists went again, heading down the back straight,” he recalls.

He hopped the wall to take a closer look. “I couldn’t believe how fast these guys were going; it was mesmerising.”

As it turned out, it was the British track team who had come to PE to race against South Africa in front of a capacity crowd. The year was 1963.

With his short back and sides long forgotten, Nefdt was blissfully unaware that his panicked parents had reported him missing and sent the police out in search of him.

“Needless to say, I didn’t go for my haircut and when I got home I got the hiding of my life.”

True to form, young Nefdt did not learn his lesson. “The next day I went back there without telling them where I was going. They found me at the Oval and then I got a snotklap.”

Undeterred, he begged his parents to let him take up cycling. They relented and, riding a borrowed bicycle in rugby shorts and a t-shirt, he won his first two races – the 800m and one-mile handicap.

“And that was the start of it.”

Nefdt, who also honed his powerful physique on the rugby field, went on to become one of South Africa’s greatest ever track sprinters, earning his first Springbok colours as a 19-year-old in 1967.

The previous December he beat Olympic medallist Klaus Kobusch in a match sprint when Eastern Province and the touring West German team met in PE.

He also smashed the junior 1km record to set the new mark at 1 minute 13.1 seconds, a time that would stand for 29 years until Dries Ferreira lowered it to 1 min 11.71 seconds.

After beating the German sprint champion, he went on to represent SA at the world championships in Amsterdam in the sprint and on the tandem with Willie Marx.

“Willie was world class; he could have been a world champion,” says Nefdt admiringly of his team-mate and biggest rival.

In his efforts to beat him, Nefdt trained seven days a week and secretly sprinted up the Friendly City’s steepest hills under the cover of darkness to build his power.

“On rainy days, I used to tell myself that Willie Marx would be sleeping in and that I would have one day more than him.”

Nefdt says his biggest regret is missing out on the 1968 Olympic Games in Mexico after South Africa was ousted from international competition.

“I could have gone to the Olympics as the reigning SA sprint champion.”

As hard as Nefdt trained, he partied even harder at various PE nightspots. “I was a naughty oke, I loved my dop.”

Crawling home from the Stage Door pub in the wee hours of one Saturday morning, he was confronted by an irate newspaper deliveryman, who was also a fan.

Nefdt quickly sobered up when he saw the headline trumpeting his clash with another national champion, Joe Billet, later that afternoon.

Battling a severe headache, he arrived at the Oval to find Billet also looking slightly worse for wear following an asthma attack.

Fortunately for Nefdt, an early show of bravado fooled the capacity crowd and Billet, who withdrew midway, bringing the meet to a welcome conclusion. “I was actually more sick than he was!”

Today, the bike on which he rode the world champs still hangs among the sporting memorabilia at the Stage Door.

“I was naughty,” laughs the five-time national tandem champ. “I’m still naughty. And I’d do it all over again.”

These days, the 64-year-old prefers to burn up the road on his motorbike or Alfa Spider.

“I’ve got five bicycles hanging in my garage. I look at them and think, ‘No, that’s just too much effort now.'”

After three close shaves with death, Nefdt celebrated his sixth decade on the planet by showing his endurance in a series of sporting challenges.

In his 60th year, he rode The Herald VW Cycle Tour and the Cape Argus Pick n Pay Cycle Tour. “I also swam the Redhouse River Mile, took part in the Ocean Racing Series and rode the Buffalo Rally on my motorbike – it was crazy.”

He says that task will probably fall to his son Gustav and daughters Inge and Anke.

Still involved in the sports industry, as the marketing and sales agent for Puma in the Eastern Cape, Nefdt finally fulfilled his late father’s rugby aspirations by assuming the presidency of the Crusaders Rugby Club and steering the association through its 125th anniversary celebrations.

He still lives in Walmer with his wife Margy, to whom he has been married for “30-something years”. The former cardiac technician has quite literally had his heart since resuscitating him after he was accidentally electrocuted while they were dating.

“I wouldn’t be here without her,” he says simply.

The irrepressible Nefdt has certainly proved his staying power and, with his record-breaking legacy, has assumed his rightful place among the Legends of the Pedal.