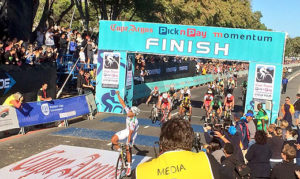 Hoffman claimed the green points jersey in the Bestmed Tour de Boland, presented by ASG, which finished in Franschhoek on Friday.

Cherise Stander, riding for RE-CM, won her second title in the women’s race after all her challengers were left behind in windy conditions out on the course.

For more breaking news and views, visit In the Bunch on Twitter.