I’ll never forget when I heard about Marco’s passing. I was at home in Girona when a message came through. Complete shock is the only way I can sum up how I felt. 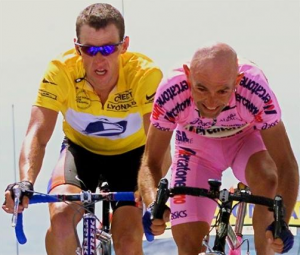 Ironically, and I remember it like it was yesterday, earlier that day I was having a conversation with Michele Ferrari.

He and Marco didn’t work together, but the two of them were friendly and I asked him, ‘hey what’s going on with Marco these days?’ Everything had seemed to slow, and there wasn’t much news.

Michele told me he hadn’t heard good reports lately and he was concerned how things might end up.

That night, I received a message from Italian journalist Pier Bergonzi that read “Pantani is dead”. I sat there alone, and thought “Fuck!”. The climber I’d battled on, and off, the bike for so long was dead.

It’s nearly ten years since his passing but I still remember my very first race with him. It was at the Tour of Mexico, in 1994.

I was there with Motorola and Carerra were there with Chiapucci and Pantani too. I have to be honest I didn’t notice him much at the race. He wasn’t a team leader and, although he was seen as a promising climber, he’d not made a huge impact on my life yet.

Of course, I took notice when he was second at the Giro later that year.