My dad was a born storyteller and it was through his tales that I first fell in love with the sport of cycling. 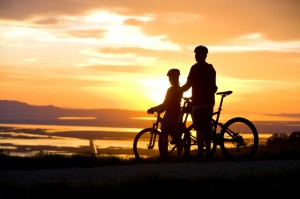 Some of these were about Martin Nefdt, Willie Marx and Carl Mulder whose exploits packed out the Westbourne Oval in Port Elizabeth every weekend.

He explained that Nefdt and Marx had no equals in a short sprint and that a wily Mulder – who also had a good road pedigree – would often start the sprint at the bell because what he lacked in speed, he made up for in stamina.

In the sixties, the Oval was pure theatre and the riders were the actors. Although they played to the crowd, it was not make-believe like The Bold and Beautiful – they were reality stars à la Survivor.

The newspapers would play up the various rivalries during the week and on race day the public would stream in to see the battles unfold. These riders were undoubtedly the celebs of their time.

Although my dad would possibly be best remembered for his performances on the badminton courts around the Bay, he also dabbled in track cycling as a contemporary of these superstars.

He didn’t come from a privileged background and was forced to make ends meet by working as a crane driver on the harbour at odd hours, which ultimately cut his racing career short.

A journalist once wrote, he told me, that Neft, Marx, Mulder and he were future provincial stars (in the years when it still meant something). He stopped shortly afterwards, while they became Springboks.

Another story I found interesting was that they would train at the Oval before dawn and – if they had arrived separately – often only became aware of each other when one of them caught up to the other.

There was also a tale of butter being used instead of Vaseline or grease to lube the bearings in the bottom bracket. Apparently it was smooth as silk, but only good for one race meeting (I suspect that excluded the 25k).

My dad sold his DHC for a Ford Corsair and opted for extra shifts at the harbour to start building a better future for himself, which included meeting his soon-to-be wife at a badminton do.

Apart from being introduced to each other through sport, my mom was never really into it. My dad, on the other hand, didn’t really care for much else.

This rubbed off on me and my early years were spent on cricket fields and tennis courts or, on Saturday afternoons, on the couch watching Sport ’79, Sport ’80 and so forth.

However, it was always my dad’s cycling stories that intrigued me most.

One of their staple rides on their track bikes was around “the Marine” – a wind-swept, flattish circular course of around 40 kilometres which we often drove as a family on Sunday afternoons.

I always wanted to live that memory and so, in standard six, I rounded up a friend one Saturday morning and we set out to do it on our school transporters – including padkos on the carriers.

That signalled the end of what could have been a fine tennis or cricket career and the start of my cycling journey.

Although I can honestly say that I hated the stress of racing, I simply loved riding my bike. I rose through the ranks to a point where I too had to make a decision between fun and future.

Like many schoolboys, I had envisioned myself turning pro one day, but without much “old money” floating around the family, my sense of responsibility prevailed and I opted for the books while earning pocket money as a freelance cycling journalist.

It was a bitter pill to swallow to stand on the sidelines reporting on races that I knew I could have been winning, but as my working career took off I realised that I was indeed making a living off the sport – something very few of my contemporaries could say.

If I were brutally honest, I had at times resented my parents for not giving us better career guidance while we were growing up. The first time the topic was broached was after I had completed my military service and I asked the question, “What now?”.

However, it wasn’t until very recently that I realised the role that my dad had unwittingly played in forming my career. He planted the seed that grew into a passion, which eventually bore a business.

Now I’m wondering whether this wasn’t the best career guidance ever.