Nils Frommhold (GER) took on the pre-race favourites and triumphed at the tenth anniversary of Ironman South Africa. 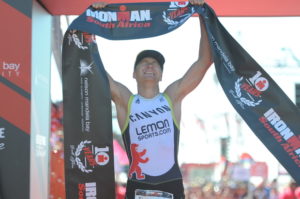 The ladies’ race mirrored that of last year with Jodie Swallow (GBR) dominating proceedings only to be trounced at the death with Simone Braendli taking the spoils.

The day started out with ideal weather conditions. The sea was flat with only a light north-westerly wind as the athletes began their swim.

Exiting the water with the lead group, Al-Sultan managed to get an early lead on the trailed closely by Frommhold and Diederen.

The early leaders kept a distance of 60 metres between the three of them. When the leading group passed the 30km mark, a small chase pack was starting to form behind them. It was from this chase pack that Georg Potrebitsch (GER) moved up the positions to steal the lead from Al-Sultan who had been looking comfortable.

Once Frommhold gained the lead, he looked determined to hold onto it.

As expected, it was Jodie Swallow who dominated the swim exiting first for the ladies with a blistering pace that placed her second overall. Lucie Reed (CZE) and Simone Braendli were second and third out of the water to begin the chase. Rounding up the top five were Denmark’s Michelle Vesterby and Katja Konschak (GER) four minutes later.

Swallow took off on her bike, making light work of the bike in the early morning’s favourable conditions. Reed trailed by only two minutes with Braendli close by.

Up until 42km the leading pack remained unchanged. Swallow had a substantial lead over Reed, Braendli, Vesterby and Lucy Gossage (GBR) respectively. At the halfway mark, Reed seemed to be losing strength and relinquished her second position to Vesterby.

Braendli kept the lead all the way to the finish with a smooth and comfortable run to cross in 09:31:53, while Swallow held off Gossage for her second consecutive second place finish at Ironman South Africa in a time of 09:33:58.