Ashleigh Moolman Pasio shares a special story with us. 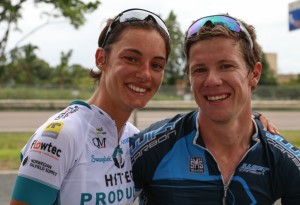 So the secret is out – this week my dedicated and talented training partner, my husband Carl, exploded onto the cycling scene with his impressive performance at Mzansi tour, 2.2 UCI tour in South Africa.

Today I would like to share a very special story with you, by the way this is Carl’s favourite story, which he tells at every opportunity:

Carl and I met at Stellenbosch University. We were both studying engineering, him Civil, and I Chemical, however in your first year at Stellenbosch all engineers do the same subjects.

Carl and I started dating soon after we met. Carl is not the type of guy to waste time, when he decides he wants something, he gets it – so needless to say, he swept me off my feet in the first few weeks at university and by the time our first test week took place, Carl and I were officially dating!

Test week came and went, and I must admit I was particularly surprised at how chilled Carl was throughout the week. While I was studying super hard, Carl was spending his time training for World Triathlon Champs to be held in Gamagori, Japan, later that year.

Sitting in math class after our first engineering test week, nervously awaiting our marks, our Maths lecturer stood at the front of the class and made the following announcement:

“The top mark in the class is an impressive 98%, and the lowest mark is a dismal 11%! The person who got 11% should reconsider their line of study!” and with that she invited us to the front of the class to collect our papers.

Being the nervous first year engineering students that we were, we eagerly ran to the front of the class to retrieve our papers, oblivious of what to expect. I happened to notice my paper very quickly, and to my surprise I saw written in big red next to my name – 98%!

Then out the corner of my eye I couldn’t help but notice Carl’s look of absolute terror and shock! He did his best to hide it and calmly asked me what I had got. As I told him my mark, under my breath, as I was slightly tentative – I didn’t know what my new cool dude, sporty boyfriend would think. And with that he dropped his paper and ran!!! Literally, he ran so fast I didn’t even have an opportunity to say a thing.

Shortly after, I set off to find Carl at his University res room. After knocking a few times, I managed to get him to show his face. I told him that he was not to worry and that we could get through this together! I made a pact with him, I told him that if he taught me how to become a world class athlete, I would teach him how to study!

And this is where it all started…