Welsh cyclist Geraint Thomas stated that he is happy to help Sky team-mates Bradley Wiggins and Edvald Boasson Hagen at next week’s Paris-Roubaix, regardless of the fact that he finished an impressive eighth at the Tour of Flanders. 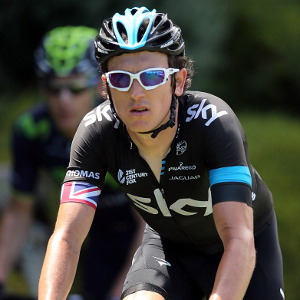 Having finished third at E3 Harelbeke 10 days ago and come 10th in Flanders three years ago, double Olympic track cycling champion Thomas showed he is in good form on the cobbles.

Despite hurting his back in a crash Sunday, he climbed back onto the bike and kept up with the favourites until the last 15km, when he found himself in a fight for the minor placings.

He had come into the race as an outside bet for the win but despite not quite matching that expectation, he is happy to take a back-seat at Sunday’s ‘Hell of the North’ race and take his turn working for others.

“Obviously Stannard’s not starting (due to a fractured vertebrae) so now I’m happy to commit 100 percent to Eddy and do my bit for him,” said Thomas, who briefly forgot 2012 Tour de France winner Wiggins.

“Obviously Brad’s got some great form, he’s physically one of the strongest in the race. – AFP