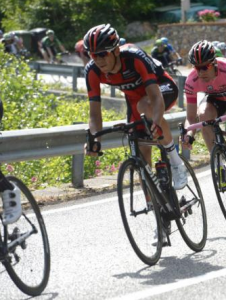 Unlike the other pre-race favourites for the Giro d’Italia title current race leader Cadel Evans hasn’t had any bad luck to get in the way of his racing.

His team’s opening time trial was similar to main rivals Movistar, way better than Katusha’s struggles and compared to Garmin’s memories of Ireland it was a relatively stress free start.

That’s as much to do with Evans’ character and abilities to stay near the front of any group when he’s involved in the fight for the win as it is good fortune.

It won’t last though because there a couple of things you learn when you ride a Grand Tour: one is that you will have a bad moment and another is that you are more likely than not to fall off at least once.

My personal best was six crashes at the ’88 Vuelta, though given the amount of surgical dressings and problems in finding a sleeping position by the time I reached Madrid I didn’t think of it as much of an achievement at the time.

Of those six times I tasted Spanish soil, five of them were due to circumstances beyond my control, unlike the crash I had warming up for the TT which was kind of my fault.

But all other times someone else messed up. Cursing and recriminations were involved but that was the end of it as no-one felt abused or taken advantage of.

And that brings me to the Montecassino pile-up and the decision taken by BMC not to wait for those caught behind the crash. OK I get the excuse that it was the finale and the race was on but there’s still the hint that it was a bit of a crap thing to profit from.

READ |  Giro d'Italia: Who's saying what ahead of the year's first Grand Tour

More importantly it signals to the other teams the moral level at which this Giro will be conducted and that might just be Cadel Evans undoing. One hint of a problem, one mechanical, one puncture, one natural break taken and it could well be the signal for all hell to be let loose on BMC and the Australian.

Race leadership is stressful enough without reinforcing the paranoia that the other teams are all against you. Of course they are against you it’s a competition I hear you say but you still need some friends to get through any dodgy moments. – Cyclingnews