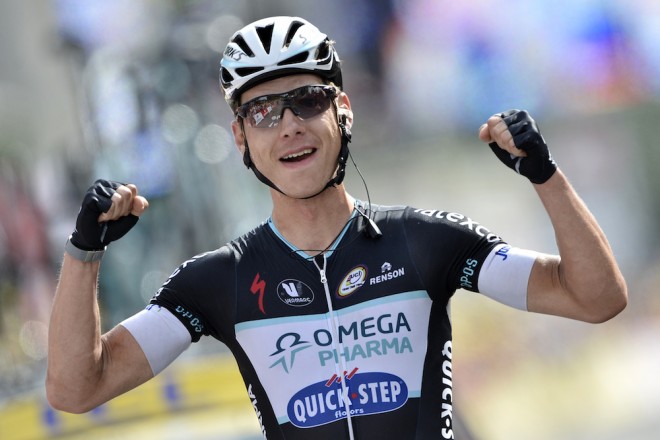 The ninth stage, the second in the Vosges, took in a wealth of categorized climbs that kicked off straight from the gun, among them the category-1 Le Markstein, a 10.8km climb averaging 5.4 percent.

After the Markstein and the cat-3 Grand Ballon, the run into the finish was a largely flat one, save for an uncategorized ascent of the Col Amic.

The attacks began almost immediately, and a big break formed up and then came apart along the way. Alessandro De Marchi (Cannondale) attacked ahead of the cat.-3 Col du Wettstein, Martin followed, and with 50km to race the world time trial champion was the lone leader on the road.

De Marchi was in pursuit at 1:45 seconds back, with a group containing GC threat Gallopin at 3:15 and the yellow-jersey group of Vincenzo Nibali (Astana) at 8:07 with 50km to go. Gallopin started the day 11th overall at 3:27 down on Nibali.

With 43km remaining Martin crested the Grand Ballon alone and was looking solid for the stage win as the first chase swept up De Marchi some two and a half minutes behind. – VeloNews