Richard Murray won South Africa’s first medal of the Commonwealth Games in Glasgow yesterday when he finished third in the men’s triathlon to take bronze behind England’s Brownlee brothers. 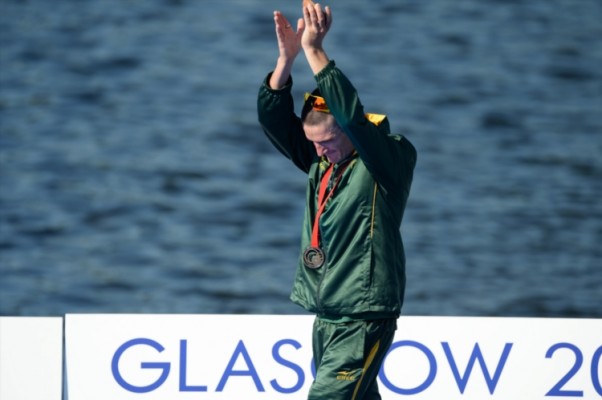 Richard Murray of South Africa with his bronze medal in the mens triathlon during day one of the 20th Commonwealth Games. Photo: Roger Sedres / Gallo Images

“It was only halfway through the run that I realised what this would mean,” an ecstatic Murray said afterwards.

“Before the race I was a bit concerned. The water heated up and it meant no wet-suits. That can sometimes change the dynamics, but it was wonderful out there.”

The brothers pulled an additional six swimmers into the lead group, which had 20 seconds’ advantage at the beginning of the 40 kilometre cycle.

“The start was pretty rough, but I managed to get through to the front at the end of the swim and tried to create a bit of a gap for a breakaway,” said Schoeman, who skidded into a barrier in the first lap of the cycle leg.

“My brakes locked up. I’m lucky to have been upright. Without that it could have been much better.”

Murray posted the sixth fastest bike time to come through in fifth place as he entered into the 10km run.

“On the bike I knew that first and second was probably out of the question, because it started to become tactical,” Murray said. – Sapa