Cyclingnews writes that last year December Christophe Bassons met Lance Armstrong in Paris. As well as touching on their short conversation on the road to Sestrières during the 1999 Tour, the pair discussed what it was that set them on different paths, as Bassons reveals in this extract from his autobiography, A Clean Break: 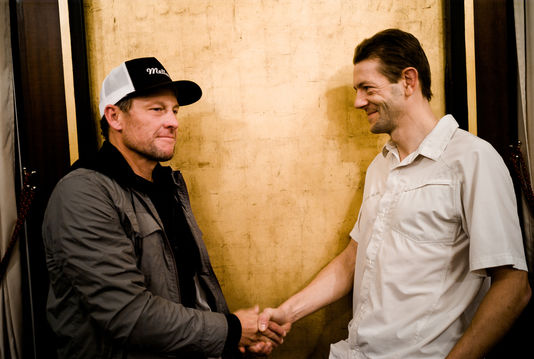 Sometimes people ask me if I’m happy with what has happened to Lance Armstrong. This question really annoys me. Why should I be happy? What has changed that would satisfy me? Lance Armstrong has good reason to see the irony in the status of scapegoat that has been conferred on him.

Over the winter of 2012–13, it seems I hardly stopped speaking about this man with whom I had only talked after all for just a minute of my life, even if that minute did seem particularly long…

Via intermediaries, I learned that the American wanted to meet me. My first impulse was to say no. I was afraid of being manipulated, trapped. Was he intending to get me involved in his complicated judicial affairs, to use our tête à tête as a way of appeasing the American courts? I am fully aware of the importance of redemption in American culture.

And then I said yes. I realised that even though his request might have been self-serving, I also needed to have this meeting. I had questions, lots of questions, to ask him. I had personal issues that I wanted to settle before moving on to other things. The conversation we had started on the descent from Sestrières had only lasted a few seconds. It needed to be completed.

In addition, I could see a good reason for having such a meeting with regard to the prevention of doping. What could be better than showing that choices made in the short term do not always turn out to be the best in the long term?

It was to be me, the little outcast within the pro peloton in the years between 1998 and 2001 against Lance Armstrong. As they say in tennis, we would be at love-all with Bassons to serve!

The meeting took place in a room at Fouquet’s, a renowned restaurant on the Champs-Elysées. Lance Armstrong had finished seven Tours de France with the yellow jersey on his shoulders on this avenue.

I saw him arrive with a cap pulled tight down on his head. His features were drawn. The week before, he had met his former masseur Emma O’Reilly and asked her to forgive him for dragging her name through the mud after she had called his performances into question. I also knew he had just met with Filippo Simeoni in Italy.