Jack Colin Lester has always been a man with a plan. 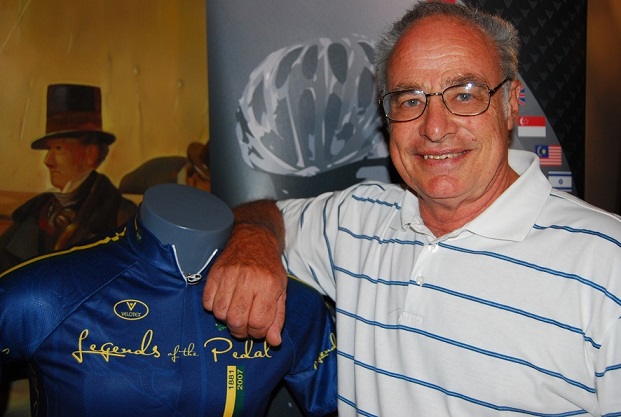 Whether it was outwitting his own mother or his adversaries on the track, this Legend of the Pedal’s wheels were always turning.

“When I was about 12 years of age, I bought my bike from my mother because when I was naughty she used to take it away.

“But I worked out a plan that if I bought it she wouldn’t be able to take it away from me.”

Of course, he was never completely able to escape the inevitable consequences of his frequent bad behaviour.

“I was very naughty. My sister-in-law remembers my mother chasing me around with a tomato box plank – with the nails still in it!”

Ultimately, it was his strategic thinking ability that made the young Lester grow up to become one of the most successful all-round cyclists in South African history.

“I don’t think I was physically the best rider at any time,” says the multiple national road and track champion.

“Guys like Willie Marx and Alan van Heerden were better sprinters on track and road respectively, but I could outmanoeuvre them.

“My tactic was that I would get people to ride my race and not theirs. If you ride their race, they’ll beat you – so I’d try to confuse them by various means, like boxing them in.”

In 1967, he received his Springbok colours for the first time in a track test against West Germany and Japan.

That year, he was also part of the national team that competed in the world championships in Amsterdam.

Lester and teammates Willie Marx, Johan Nicol and Martin Nefdt were also scheduled to compete in the Olympics in Mexico the following year – until South Africa was banned from international competition shortly before the Games.

“So that was it. But it was to be expected,” he says philosophically.

“We weren’t a democratic society and we picked up the tab. It was as simple as that.”

Back home, however, the local crowds were still packing out stadiums like Hector Norris Park in Lester’s hometown of Johannesburg.

“It was largely thanks to the efforts of our announcer Basil Cohen. He could turn a pram race into a Formula One grand prix.”

Cohen, with his encyclopaedic knowledge and passion for cycling, stirred up public interest by creating characters of the individual cyclists.

It was he who was responsible for dreaming up personas such as Joe ‘The Bullet’ Billett, Dries ‘The Benoni Bombshell’ Oberholzer and – in a particularly creative leap – ‘Varkie McCoy the Flying Boy’ for rider Raymond Hogg.

“Cycling was very much an individual sport, there was no teamwork, and consequently we were like gladiators on wheels.

“Make no mistake, what people want to see is the rush to the line. They want to see bumping and barging and falls as well.”

“I remember them coming out all bandaged up and having another go!”

It was this electrifying atmosphere that also inspired his young son and future multiple SA champion Norman to follow in his footsteps.

“Norman’s a gentle soul but his bike handling ability was legendary. He was the only guy who could go through a bunch with both hands off the handlebars – he was phenomenal.

“In terms of physical ability he was most probably better than me but tactically I could make up a plan, let’s put it that way.”

“What science has done to the sport is phenomenal but, as true amateurs, we were closer to the world record times than the guys are today.

“In the 4 000m team pursuit we were only half a second off the world record whereas today they’re 30 seconds behind.”

He says his personal racing strategy was fairly simple.

“I basically rode to win. It wasn’t the particular event or title that drove me.”

It was that hunger for gold that saw him break various junior national records and earn the title of Southern Transvaal league champion for twelve straight years from 1964 to 1976.

“I stopped training seriously at the age of 21 when I opened my business, Rand Carpet Layers. From then on I only trained about five weeks a year.”

In the mid-seventies he decided to combine his twin passions for business and cycling by starting the Jack Lester Carpeting team.

“When TV came, I said this is a good way of getting exposure and that’s exactly what I did.”

“Johnny was the ideal pro – respectable, good looking, articulate – and he knew all the ropes to get exposure.

“You don’t just have to win, you need to get to the front of the bunch and be a people’s person. He was an excellent choice.”

As a short-term marketing exercise the team was highly effective, so when the big pro teams like M-Net/Southern Sun and SuperSport came along, it quietly disbanded.

Today, the 67-year-old father of seven still puts in a full day at his carpeting business and shows no sign of slowing down.

He also made a comeback at this year’s Central Gauteng track championships.

“I trained for five weeks but it wasn’t long enough to win! I needed a few more days,” laughs Lester.