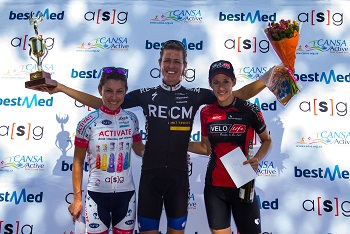 Q: What is CSA’s vision for the women’s commission?
A: Within women’s cycling people are enthusiastic about our sport and we need to convey that message to cycling community and public.

We would like to develop a road map for young riders, build national team selection criteria and implement a strategy for sustainable growth. A big focus will be finding a way to look after our riders for big goal events such as the Olympics and so on.

We need to grow the number of women on bikes to ensure sustainable change. This will involve creative initiatives geared towards the recreational cyclist all the way through to the pro.

We are hoping to assist CSA in finding sponsors through which we can drive initiatives such as: a national team programme in Europe, an annual UCI stage race in SA, mentorship and development programmes as well as training camps.

Q: How did your appointment come about?
A: Both the International Olympic Committee (IOC) and International Cycling Union (UCI) have active rider and women’s commissions. Although participation of women is increasing steadily, there is still a lack of women in governing and administrative bodies. CSA has definitely made a move in the right direction for women’s cycling in SA.

Q: When did your appointment come about?
A: I heard about it while at the Lowveld Tour.

Q: How are you feeling about the position?
A: I am honestly excited about this position. I have seen some positive change in the women’s field lately and I know that we are now past the turning point and heading in the right direction.

Q: What will your first task as women’s commission director be?
A: I am in the process of putting together the women’s commission. It needs to be well-diversified and include at least one person from each of the disciplines as well as other stakeholders. We will look at the IOC and the UCI commissions and follow their guidance. We will finalise our strategy at our first annual meeting later this year.

Q: What are your objectives?
A: As chair, I see my role as working with the women’s commission towards: uplifting the profile of women’s cycling and increasing participation, supporting CSA in finding financial support for sustainable growth initiatives and creating an enhanced communication platform where women can voice their concerns and to facilitate communication between stakeholders.

Q: South African women’s cycling certainly got a boost at the Commonwealth Games, didn’t it?
A: While with the national team at the Games last month, we had really positive discussions about women’s cycling in SA. As a team, we discussed where we are and how we want to build women’s cycling back up. We returned home with fresh ideas and a different energy to encourage change in the sport. Even though this has been a recent appointment, we have already started working towards goals set out at the Games.

Q: Give us some examples of this.
A: The recent addition of La Course at Le Tour is one example while the powerhouse American team, Team UnitedHealthcare, introduced a women’s pro team this season.

UCI President Brian Cookson is at the forefront of the fight for women’s cycling and said: “Since I became UCI president nine months ago, we have made unprecedented investment in the funding of broadcast packages around the UCI Women’s Road World Cup. This followed the appointment of Tracey Gaudry as the UCI’s first woman vice-president, and the establishment of the UCI’s first Women’s Commission.”

Q: How are things changing on the local front?
A: With the enthusiasm around women’s cycling growing internationally, it opens doors locally. Women’s road cycling has experienced some positive change. The level of the top six to eight riders might be lower than two years ago but it has opened up the opportunity for a whole new, even bigger, group of ladies to progress through the ranks. There are more juniors racing now than what I have seen during the past four years. More individual women (not part of teams) are now moving over from non-competitive bunches to the racing bunch and this is exactly what we want.

For the first time in years there is fresh energy among female cyclists and those supporting them. This is exactly the kind of energy that we need.

The focus has turned towards solutions rather than problems. This is why it is such an exciting time to be part of women’s cycling as the opportunities as endless. Other sports such as tennis have been able to change the path for their women and I see no reason why, with a concerted effort, we cannot do the same.

Q: What will your role be in the lead-up to and during the UCI Road World Championships?
A: I will not be heading to the Worlds this year. There is a very capable team going. In the meantime, I will do what I can to secure financial support for the women’s national team for 2015 and beyond.

Q: You’ve previously competed at the Worlds while racing for Lotto-Belisol in Europe. Do you believe it’s possible for SA to be competitive without international racing opportunities?
A: International racing opportunities are critical in the development of any cyclist across all disciplines. When it comes to road racing, preparing and racing as a national team in Europe prior to an event such as Worlds is essential, especially when you have medal aspirations. It is very difficult for any rider to get onto an international UCI team without UCI points. These points you can only get by racing UCI races, most of which are in Europe. Sending a national team to Europe not only prepares riders for big events, it allows them the opportunity to get a spot on a UCI team for the European season.

Q: Ashleigh Moolman-Pasio put in a fantastic performance to take bronze at the Commonwealth Games. You were part of the team that helped her. Is one of your objectives to grow the size of the team in international competitions like Worlds?
A: Having more riders competing internationally across all cycling disciplines is definitely a huge objective for the women’s commission. The bigger our base of riders to choose from, the more sustainable our programme becomes and the better the national team will perform in the end.

Q: How does the current South African team rate against other, more established international teams?
A: Two years ago, South African women were ranked 13th in the world for road racing. This ranking was achieved with only one rider being based in Europe and five others that were given the opportunity to spend part of the season there. Comparing this ranking to that of European countries, whose riders have access to UCI races, and countries like Australia and the US, who run proper national team programmes, this was incredible. Imagine what we could do with a whole bunch of women based in Europe for the entire season.

Q: Do you believe the current South African team can compete successfully against the larger continental teams?
A: My answer is definitely YES. We have really talented riders in SA. With proper international racing opportunities there is no reason why we cannot compete with the best. For this to happen, the support has to be continual which unfortunately has not been the case for the majority of our top riders. The women’s commission is hoping to change that.

Q: Do you believe Ashleigh has the form currently to medal again at the road world championships?
A: Ashleigh is a classy rider and definitely has a shot at a medal. She has proven again at the Commonwealth Games that she is not only strong enough but experienced enough to compete with the best. This has been the result of spending four consecutive years in Europe, which demonstrates first-hand the importance and benefits of continuous international opportunities.

Q: With the men’s team absent from the Commonwealth Games, all eyes will be on them at Worlds. What are your expectations?
A: It will be difficult for a team of only three riders to compete with bigger teams at that level. That being said, Jacques Janse van Rensburg and Jay Thomson will most likely come out of the Tour of Spain in excellent form. Reinhardt Janse van Rensburg is such an exciting talent and the three of them should make a formidable team. In terms of expectations, I think U23 rider Louis Meintjes has the best chance of a medal if the route is tough enough.

Q: But it’s not all about road racing is it?
A: No, not at all. It’s so important to have a well-diversified women’s commission that represents all disciplines, including our mountain biking talent. I’ve already been approached about this and it is honestly our intention to support all disciplines through this platform.