I first laid eyes on Michal Kwiatkowski when he darted from the bunch in the run-in to the finish in one of the Classics. 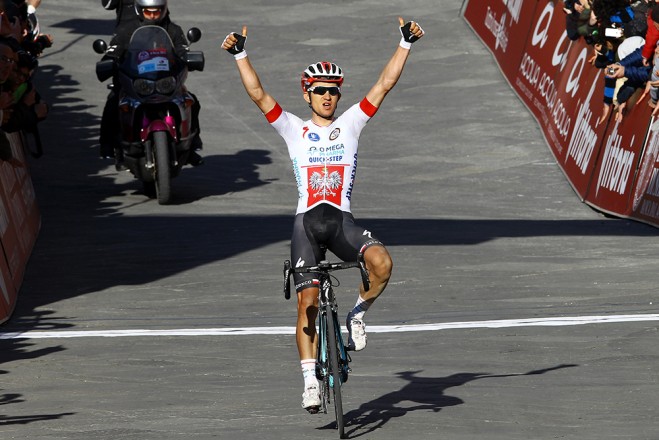 He put in an impressive effort to hold off the peloton for a bit, but was ultimately reeled in by the sprinting trains and spit out the back to finish stone last.

I remember thinking that if he had timed his effort better, he might have had a better chance. Kwiatkowski was around twenty-two at the time and I put it down to youthful exuberance.

Over the next eighteen months the young Pole’s escapades off the front of the peloton in important races continued to grab my attention and eventually I became more than a little frustrated as he turned winning positions into losing moves.

Patience was obviously a virtue that had eluded Kwiatkowski as much as those important victories. At some point, one would’ve imagined, he would reassess his racing strategy and turn class into Classic victories.

No one doubted his class and this was underlined when the Polish federation named him team leader for the Worlds in Spain this autumn. Even more so, his team put their faith in him as they sat at the front of the bunch for much of the race to put him in position for one of his trademark attacks.

When the attack eventually came between the final two ascents – and the rest of the favourites preferred to hold their cards close to their chest – I held my breath.

After seven hours of racing, my gut told me that he was going way too early and that he was once again setting up a victory for his rivals.

But, with the advantage of hindsight, we now know that he had timed his effort to absolute perfection and rolled over the line a mere second ahead of the chasers to collect the biggest win of them all.

I was elated for his (and possibly my own) sake. He had sacrificed an awful lot of titles to get his hands on this one and I felt we had a worthy world champion.

But it wasn’t until a few weeks later – during a squash coaching session of all things – that I was able to fully interpret and verbalise the process that Kwiatkowski had gone through to taste success.

My coach and I were busy with a drill that was designed to achieve a specific end result on my backhand. I started off rather shakily as I tried to understand the exact force and angle needed to land the ball where the coach wanted.

It was a gradual thing and several minutes into the process I eventually hit the sweet spot – and then again and again. Slowly but surely I started recognising the trajectory off the front wall and was able to adapt my shotmaking to achieve the desired result.

Even though I’m nothing more than a social squash player, I was mightily excited to have been able to tweak my mental process, resultant stroke and result due to this drill. I turned to my coach and told him how much easier I found it once I got it right the first time.

READ |  Douglas Ryder: The SMS that changed everything

He smiled and told me that, in essence, repetition was at the basis of any training regime. For, in a match situation, you are eventually presented with a scenario that is not just close to what you’ve practised, but exactly the same.

When that moment comes, your mind does not need to compute the scenario – it already knows what to do to achieve the desired result.

Funny you say that, I told my coach. The new world cycling champion has just used the same technique.