The Action Ford Berge en Dale Classic, taking place near Krugersdorp on January 31, will serve as an acid test for South Africa’s top pro cycling teams ahead of the national road championships.

The 102km feature race, which is powered by Optimum Financial Services, will follow an undulating route that starts at Cradlestone Mall in Muldersdrift and takes in the area around the Sterkfontein Caves and Cradle of Humankind.

Billed as the West Rand’s biggest cycle race, it will be the last chance for the elites to check out the competition before the national champs in Mbombela (Nelspruit), Mpumalanga, the following week. 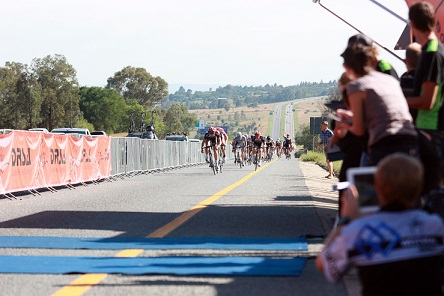 South Africa’s top pro cycling teams will face an acid test of their form ahead of the national road championships when they square off at the Action Ford Berge en Dale Classic near Krugersdorp on January 31. Pictured here is the winning sprint from the 2013 event. Photo: Supplied

According to race director Wynand de Villiers of ASG Events, the stage would be set for some top-flight racing action.

“This is the final dress rehearsal for all the teams leading up to the SA’s, so it’s going to be tough,” he said.

De Villiers said, unlike many classics, the route offered something for both climbers and sprinters.

“There’s quite a bit of climbing and a long uphill drag to the finishing sprint. The pure sprinters don’t have it all their own way, as there’s a lot of brute power required to get up the hill first.”

He said an all-rounder with a good finishing kick would be most likely to succeed.

Last year, the African contingent of the MTN-Qhubeka feeder team, who are based in Potchefstroom, dominated the podium.

“They’re such a wonderful attacking squad and it’s always a privilege to have them at the event,” said De Villiers.

The 2014 race was won by their Namibian rider Costa Seibeb, who took his first win on South African soil. Seibeb has since left the team, which opens the door to a new victor.

The team could be looking to the likes of Eritrean rider Tesfom Okubamariam, who finished in the runner-up spot.

As current African road race champion, Okubamariam should be aiming to peak in time for the Mpumalanga race if he hopes to defend his continental title in KwaZulu-Natal two weeks later.

Late entries for both the 102km and 55km racing options will be accepted at registration but not on the morning of the event.