You can’t keep a good man down, as the saying goes, and if there is one thing that Hennie ‘Wiele’ Wentzel epitomises, it is endurance.

In the words of Legends of the Pedal mastermind Johnny Koen, Wiele remains “one of the greatest characters and probably the most resilient, tough, unforgiving, never-say-die riders of all time!” 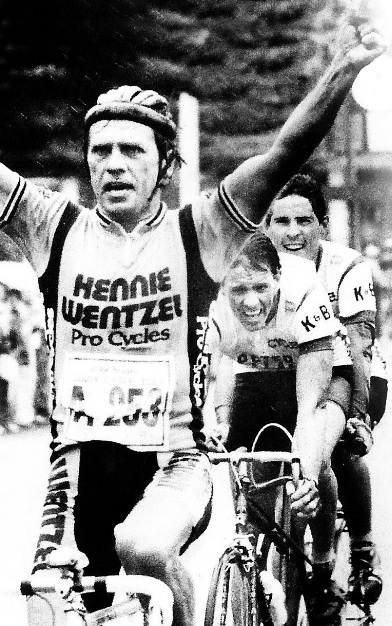 Not even after hitting a stationary vehicle at 40km an hour while out on a training ride last November.

“I was out training because I had entered for the Ironman again, which is now at the end of March. If it weren’t for that, I wouldn’t have gone out that evening because the southeaster was pumping.”

With a strong tailwind on the Bottelary Road, Hennie was concentrating on avoiding a rash of stones on the road as he headed home towards Brackenfell in Cape Town.

“I looked up and the car was standing right in front of me in the yellow lane. It was within a metre, there was no chance to brake or swerve.”

The 65-year-old hit a steel column on the back of the vehicle, with his body taking the force of the impact.

“I had almost 100 stitches, a skin graft, a knee op; they put five anchors in my left shoulder – the bone broke in two or three places and the tendon snapped off.”

Having missed hitting his head by a mere six inches, doctors say Hennie is lucky to be alive today.

“I was in ICU for three days and 10 days in hospital altogether.”

But, true to form, he simply could not take the setback lying down.

“After I got out of hospital on the Thursday, I walked four kilometres on the Saturday to go buy the newspaper.

“I haven’t had any physio yet because I’m waiting to hear if I’ll need further surgery. So I walk between 40 and 50 kilometres a week just to keep me going.”

Wiele is also keeping his wheels turning on the indoor trainer.

“I used to say to my sons, ‘Opstaan en op jul fietse!’ when they fell. That’s the way we grew up – I’ll go down fighting.”

Since taking up cycling 50 years ago, the three-month enforced rest is the longest break Hennie has taken from his beloved sport. (He had another torturous hiatus while serving in the army on the border.)

“There was always cycling somewhere in my family. The Binnemans were big into cycling and Uncle Hennie, my mother’s cousin, won the Commonwealth Games in 1936.”

With top cyclists Eddie Kriel and Gotty Hansen staying around the corner from his childhood home in Belville, his immersion was complete.

“They came to visit at our home with their bikes. As kids, to see the bikes these guys were riding, it was great.”

He joined the Bellville Cycling Club as an impressionable 14-year-old in August 1964.

“I won my first SA title when I was 15. As a 16-year-old I rode for Western Province in the senior team.

“I don’t want to blow my own trumpet, but I was quite good,” he laughs modestly.

In 1967, the all-rounder got his first taste of international competition as part of the junior team at the Tour de Juergen in Germany.

“It was a weeklong tour. I had bad luck on the first day when I fell and finished 92nd; but by the end of the week I came back to finish 31st, so my chances would have been good for a top-10 placing.”

By the following year, with South Africa booted out of world sport due its apartheid policies, Hennie’s Olympic dreams were dashed.

He turned his attention to the tests on home soil but fate was to strike a blow there too.

“In ’68, while I was in the army, an Aussie team came out here but I broke my wrist on the Paarl track two weeks before the test.”

Hennie took what competition he could get and was one of the few riders to successfully cross the divide and win both the closed (whites-only) national road championship in Bloemfontein in 1973 and the open SA title in Port Elizabeth three years later.

In 1982, he earned his Springbok colours for a three-test track series against a Swiss team – whose members received a six-month suspension for their involvement with SA.

“We beat the Swiss in all three tests. But I think we caught them on their off-season because they had two world champions and a world record holder on their team.”

There also followed road races against Portuguese and Italian teams who came to compete without permission from their governing bodies.

“Sometime in the ’80s, a team was chosen to go ride in the old West Germany tour. We were staying in Belgium and had an invitation to team up with the Germans.”

“Gotty, who was our manager, was running up and down from Belgium to the UCI head office in Switzerland to get licences for us. But because of the apartheid policies, they refused to give us licences, so we went there for nothing.”

Undaunted, Hennie became one of the few cyclists to remain competitive throughout the isolation years, claiming a dozen national titles on road and track.

“I was in racing mode from the ’60s to the ’90s – I could be the first guy to have Springbok colours in all those decades.”

A three-time Argus champion (now the Cape Town Cycle Tour), he also claimed four victories in the male tandem category and one in the mixed.

Having covered the full spectrum of cycling, the super-fit athlete was looking to up the stakes with a fresh challenge when the duathlon and triathlon bug bit.

“I owned bike shops in Claremont and Cape Town. Then this triathlon thing started and lots of southern suburbs started coming in to buy equipment and that’s how I got interested.”

With a business to run, he started putting in around three-and-a-half hours of training every day – swimming before work and running or cycling in the evenings.

With his power on the bike and an ability to run a sub-three-hour marathon, he more than compensated for his swimming ability.

Making the transition to multi-sport, Hennie continued to succeed, adding Springbok colours for duathlon and triathlon to his cycling achievements.

“I won a world title in duathlon as a veteran when I was 42. I also got a third in the triathlon competition in New Zealand.”

At age 51, he finished 16th overall in the Ironman competition in Gordon’s Bay.

“I did four Ironmans and won my age category three times. The last one – four years ago – I blew totally on the run and was beaten by something like 10 seconds.

“In my whole career I’ve only lost one triathlon in my age group.”

Hennie says he made the switch from triathlon to the Ironman format because of the tri rule that allows drafting in the bunch.

The tough competitor was unimpressed by the idea of a free ride.

“If you’re a good swimmer, you can just sit in the bunch and draft, and if you’re a strong runner at the end, you win the race. In Ironman, there’s no drafting allowed.

Although he is currently out of action he still hopes to break the 10-hour barrier in Ironman and run the Two Oceans Marathon again.

“My shoulder’s still sore; I can lift it but I can’t make a swimming motion and swing my arm round, so I don’t know if I’ll ever be able to swim competitively again.

“Especially in running, I’ve had injuries like you wouldn’t believe. That’s besides all the years of falling, breaking wrists and collarbones etcetera.

“I’ve been through quite a bit but this last accident was the worst.”

One would think that the latest incident would have deterred him for life but in the very next breath Hennie says, “I can’t wait to get out on the bike and riding with the guys again.”

He has also passed his passion for cycling on to his sons Rudolf, who was a professional cyclist in Belgium, and Konrad, who these days enjoys the more social sport of mountain biking.

Despite his many successes and staying power, Hennie remains self-effacing.

“If you come into my house, you won’t see the trophies or anything because that’s not me.

“I didn’t keep the scrapbook clippings and I’m sorry about that because that’s something I could have given to my grandchildren.

“It never worried me before but when you get older you suddenly want to read these things again and see your achievements. It’s all in the memory now.”