The Time Trial elite’s took centre stage as defending champions Daryl Impey and Ashleigh Moolman Pasio both proved to be strong contenders in their respective fields at the Pennypinchers South African Road, Time Trial and Para-cycling Championships in Wartburg today. 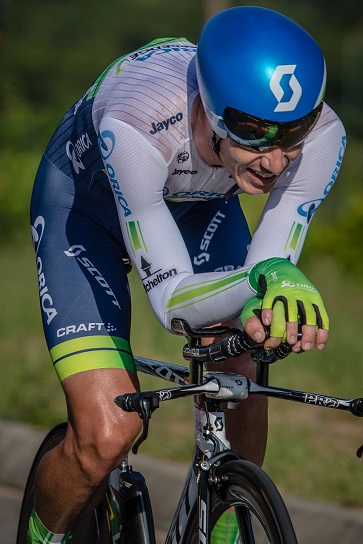 Impey felt at the top of his game when he set out early in the morning on what would be a commanding ride.

“That good start gave me a lot of confidence going into the final couple of laps and I kept powering through to the finish and I’m just really happy to have retained my winners jersey.” said Impey.

Runner-up in the men’s time trial, Reinhardt Janse van Rensburg, was happy with his performance and felt he did everything he could out on a tough circuit.

“The circuit was quite tough but I really enjoyed it because it was pretty technical and although I didn’t manage to win the race I am still pretty happy with my result and I am just looking forward to the Road Race this weekend.” a content Van Rensburg mentioned.

In the ladies race Ashleigh Moolman Pasio powered her way to another South African national championship.

“I pushed really hard from the beginning and when I knew that I had a substantial lead it was a case of maintaining and it is just really special to win my third Time Trial in a row.” the champion said.

The Under-23 Men’s Time Trial was another focus of the day with Morné van Niekerk claiming the win from Nicholas Dlamini by just under two minutes.

Gregory deVink was the fastest in the Junior Men’s category after narrowly edging out Jarrod Hattingh.

The Junior Women’s race was won by Frances du Toit who beat off Lynette Benson and Anje Gerber for the top step of the podium.

Veteran Adele Janse van Vuuren claimed the title in the Ladies 40-44 age category and Monica Glover was the strongest rider in the Women’s 45-49 bracket.