RED-E Blend’s Darren Lill and Waylon Woolcock, managed to overcome the 22 minute time deficit incurred on stage one in an attempt to claim the red Absa African special jersey from overall leaders Rourke Croeser and Travis Walker during stage two of the 2015 Absa Cape Epic at Oak Valley Wine Estate on Tuesday.

Croeser and Walker will still be in red on Wednesday’s Stage three followed one minute and 32 seconds back by Philip Buys and Matthys Beukes of Scott Factory Racing. 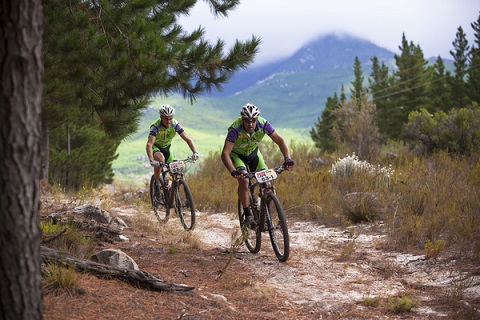 “Along with Philip and Matthys we put some pressure on Travis and Rourke, and did some damage,” said Woolcock.

“Today was very windy and it was not always so easy out there. We are happy to be upright still and are feeling confident for the days ahead.”

The South Africans are now less than two minutes behind Brentjens and Azevedo in the race for the blue category jersey.

Pfitzenmaier, who had struggled on Stage one, said: “I felt way better than yesterday. Today was my favourite kind of racing. I feel at home here because we come and ride so much on these trails. I really wanted the victory on ‘home soil’, so I am very happy.”

There was drama in the Mixed category when overnight leaders Rene Haselbacher and Sabine Sommer, both of Austria and riding for team ENS RH77, got lost towards the end of the stage and finished fourth in the category on the day – more than 12 minutes back.

“We took a wrong turn close to the finish that added some three kilometres to our stage,” said Haselbacher, a former Tour de France rider.

Slovenian Peter Vesel and his German partner Ivonne Kraft (ETIS) won the stage and took the overall lead, but only have a one-and-a-half minute cushion over Haselbacher and Sommer, which they may find difficult to defend over the remaining five stages.

“We’re not happy to lose the overall lead, but we still have time to get back in front,” said Haselbacher.