Altech Autopage’s pro cyclist Chris Wolhuter was at the forefront of the action in the inaugural Liberty Cape Winelands MTB Encounter. These are his thoughts following stage two.

As a bike rider in the Cape, the wind can often be a point of discussion.

As our foe yesterday, it became our friend today as it steadily blew down the Franschhoek valley again, this time however it was behind us and we ticked off the first 30km of the stage on open gravel roads within an hour.

A trip through the Drakenstein prison – where our former president Nelson Mandela spent some time there during his imprisonment – was a lesson in history. 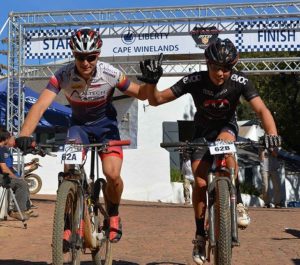 It was towards the end of his days of sentence and he was in fact moved to a house as opposed to remaining in the prison cells.

The prison also marked a change in proceedings as we headed into the mountains on rougher, rockier and more undulating trails. We had the Contego Swift boys and Pretoria Box youngsters with us for company.

The accelerations started to come as we passed the final water point 50km into the stage and started the serious climbing into the Wellington valley.

One of the Pretoria Box youngsters had put in an effort up the road, but with his partner behind us, we remained the first team on the road so to speak.

Without taking too many risks on the descent we consolidated to finish the stage first again with Contego Swift in second (unofficially as they did not finish yesterday’s stage with mechanicals) and Pretoria Box in third (officially, second).

It was an enjoyable day out and we are looking forward to the final stage on the famed Welvenpas trails in the morning.

With the trails in the more sheltered Wellington valley, it’s likely that the wind will play less of a factor tomorrow.