Louis Meintjes of Team MTN-Qhubeka was in the final mix at today’s Liege-Bastogne-Liege, the final spring Classic, before placing 11th behind Movistar’s three-time winner Alejandro Velverde.

The 253km La Doyenne, the oldest Classic, saw a thrilling race unfold with Meintjes in the thick of the action within the final kilometre.

A breakaway of eight riders were caught with about 70km to go, blowing the race wide open. A number of attacks ensued with three escapees – Esteban Chaves (Orica-Greenedge) and teammates Michele Scarponi and Tanel Kangert (Astana) – eventually establishing a minute gap. 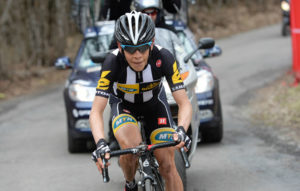 A crash then decimated the peloton with a number of favourites going down. Fortunately no Team MTN-Qhubeka riders were involved and this left the African team in a good position as Meintjes still had Merhawi Kudus, Jacques Janse van Rensburg and Steve Cummings with him with 40km to go.

The three leaders would later be caught with 20km to go.

While the rain came down, a huge acceleration on the penultimate climb saw only the 13 strongest riders get over in the lead group and Meintjes was among them.

On the final climb, Daniel Moreno (Katusha) put in a dangerous attack and Meintjes was first to respond. Moreno was brought back at the summit leaving the select group to sprint it out.

“I had pretty good legs and I was happy to have made it into the front group in the final. On the final climb my objective was really to just try and follow the best riders.

“Liege-Bastogne-Liege was one of my goal races this year so I am really glad that I was able to get some sort of a result today.”