The second of two new race villages welcomed participants on day seven of the 2015 Old Mutual joBerg2c. Mountain biker Alistair Schorn made it through the dairy farms and forest trails to be among the first to enjoy the comforts of Glencairn Farm. For more on his earlier stages, follow his Confessions of a Weekend Warrior on In the Bunch.

Glencairn Farm was the second of two new race villages on the Old Mutual joBerg2c and it proved to be a magnificent venue.

Farmer Glen and his staff pulled off a miraculous feat, under what were clearly very short timelines, to have the place even remotely ready to host close to a thousand riders, staff and supporters.

In some places it looked as if the plaster hadn’t even dried properly yet.

On the morning of day seven, we set off on a route that was very familiar to many of us, courtesy of the sani2c. 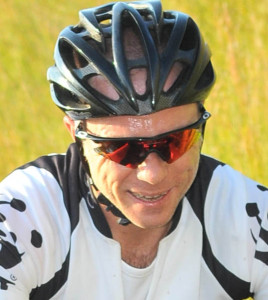 Alistair Schorn shares his thoughts on the Cape Parrot and other new things on day seven of the 2015 Old Mutual Mutual joBerg2c.

Almost from the start, it featured some fantastic singletrack (even if it appeared to have been the victim of bovine abuse in some places), forestry roads, bush tunnels and some pretty stiff climbing, though not in the same league as the previous three days.

One of the forest sections is allegedly home to the Cape Parrot, but I have to admit that over 10 years of doing sani2c and joBerg2c, I have yet to see one of these.

READ |  sani2c postponed to December due to coronavirus outbreak

But that’s Farmer Glen’s story and it seems that he’s sticking to it.

I had a fairly easy day out. I broke a spoke in my rear wheel on the first climb and, although I was able to carry on, it did compel me to be pretty circumspect in my approach to the rest of the day, so as to limit the risk of any further damage.

At the race briefing the previous evening, Farmer Glen had told us about a new finish to the stage, which avoided the dreaded 1.5km Tiny’s Climb into MacKenzie Club.

According to Glen, this new route was on a contour road and eliminated the need for any climbing to the finish. Unfortunately for us, however, it appears that he omitted to mention all the climbing that had to be done in the last 5km or so, through various dairy farms, before we even got onto his new contour road.

After that experience, it seems that a lot of people might still have preferred Tiny’s Climb . . .