After claiming their second Old Mutual joBerg2c win at the 2015 edition of the nine-day mountain bike stage race, Johann Rabie and Gawie Combrinck are set to re-tackle the Sani Pass down to Scottburgh Main Beach at this year’s sani2c, which takes place from 14-16 May.

The EAI duo stood head and shoulders above the rest of the elite men’s field at the recent nine day clash and they believe their second successive joBerg2c victory stands them in good stead ahead of this year’s tough three day long sani2c clash. 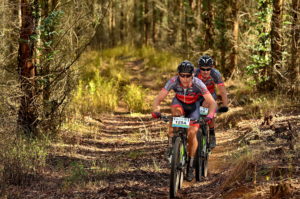 EAI’s Johann Rabie (back) and Gawie Combrinck (front) believe the additional time they spent on the trails en route to victory in the recent Old Mutual joBerg2c stands them in good stead ahead of the upcoming 2015 Nedbank sani2c. Photo: Jetline Action Photo

“joBerg2c is a long race and a lot of miles so its good training for the legs and good race preparation for sani2c as well,” says Rabie.

“sani2c will obviously see a lot more teams racing than there were at joBerg2c so the competition will definitely be taken up a notch – something we saw last year when we also won the joBerg2c but then finished third at sani,” he adds.

Rabie believes the time on the sani2c route during the final three days of this year’s joBerg2c also provided them with an invaluable opportunity to refresh their memory of the intricate details of all three stages and will aid them in the quest for another strong showing.

“It’s nice to have had the opportunity to run the sani2c route beforehand and have another look at where the quicker sections are, where the more dangerous stretches are, etc. so joBerg2c was definitely great preparation for us ahead of sani.”

NEXT ARTICLE | The joBerg2c grand finale