The former Team Sky rider beat the previous world mark of 52.937km set by compatriot Alex Dowsett in May in front of a capacity crowd. 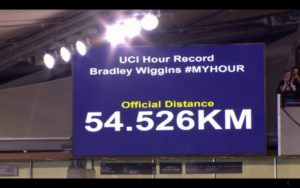 The 35-year-old Wiggins, riding in the colours of his own team Wiggins, was aiming to complete 221 laps of the velodrome for a target distance of 55.250, but fell two laps shy.

It is the fifth time in nine months that a new hour record has been set after the UCI changed the regulations in 2014.

The German Jens Voigt was the first to break the 50-kilometre mark under the new regulations when he completed a distance of 51.115km in Switzerland in September last year in his final competitive outing before retiring.

Wiggins, winner of the Tour de France in 2012 and a multiple Olympic champion, is set to retire from cycling after next year’s Olympic Games in Rio.

Get more news on the UCI Hour Record.