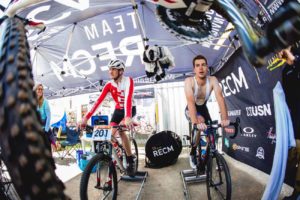 Reid grabbed the men’s XCO title in a nail-biting finishing sprint, while Vale put in a commanding performance throughout to earn the women’s title.

In the men’s race, Reid had an uninspired start and soon found himself in the bottom half of the top 10.

“I had nothing at the start and just wanted to stay in touching distance of the guys because I could see that they were having a real scrap up front,” he said.

The 22-year-old took a calm and mature approach to the racing, knowing that if he kept his pace he could eventually get in on the action.

Once he was back with the leaders, Reid kept on increasing the pressure.

“It wasn’t actually a case of me speeding up, I think the guys at the front slowed down, which helped me get among them.”

On the sixth lap, the RECM rider attacked with only U19 star Alan Hatherly (Kargo Pro) and Travis Walker (Full Dynamix/USN) able to stay with him.

“I knew that if I managed to get onto the grass first at the end then I would have a really good chance and that is how it happened!”

Western Cape local Vale was also delighted to have coasted to the national cross-country title in her own backyard.

“Winning in Stellenbosch was great and having so many people out there supporting definitely added to the win.”

Vale said the absence of defending champion Mariske Strauss had however made her victory bitter-sweet.

She got to the front with the support of her Novus OMX teammates and worked hard to stay there.

“I knew that I had to go out hard and really push on the climbs and keep myself as focused as possible with the mud around the course.

“I have never won an award like this so it is really special to have won!”

With a block of international racing under her belt this season, Vale said competing against the best in the world had helped to prepare her for the national champs.

In the junior women’s XCO race, a dominant Frances du Toit took her fifth national title of the season.