Martin Freyer and Michael Pretorius opened their account with a win on day one of the FNB Wines2Whales Adventure on Friday. 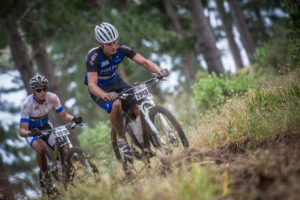 The Team Kia Namibia riders covered the 72km stage from Lourensford Wine Estate to Oak Valley Wine Estate near Grabouw in a time of 4:06:31 to claim their first stage win.

They were followed home by Michael Creedon and Andrew Davies of Team Oakhaven-Granite and Anton Koller and Gregor Krall of Team Rehidrat in second and third respectively.

Freyer said he and his teammate had just been out to enjoy the stage and that winning was a bonus.

The first mixed team was Galileo Risk’s Theresa Ralph and Hamish Knowles, who romped to the stage win in 4:35:19.

Ralph said she had some unfinished business with the Wines2Whales Race, after being forced to withdraw with a hamstring injury last year. She said she was riding the Adventure in preparation for the Race.

“I’ll be taking part again this year as part of a women’s team, where my partner and I will definitely be riding competitively.

“For now Hamish and I are just having fun. We’ll see what tomorrow brings.”

In the women’s race, the mother-and-daughter combination of Lolita and Simoné van Aardt took the stage win for Tailormade Properties-Craft Racing in 4:56:46.

“But being able to participate with my mother is really special.”

Michelle Van Aswegen and Emma Pienaar of Crackerjacks were second, while Louise Bezuidenhout and Colene Steyn of Provincial Logistics rounded out the day’s podium.

The 67km second stage starts and finishes at Oak Valley on Saturday.