The Bianchi-Westvaal mountain biking team of Tyler Day and JC Jooste took their second stage win on day two of the FNB Wines2Whales Ride near Grabouw on Tuesday. 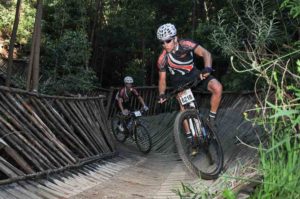 Second on the day, were Heiko Redecker and Graeme Kuys of Team FLM 8, with Warren Richards and Charles Grasse of Surf4Cars third.

The stage, which featured a total ascent of 1 366m, was misleadingly named “Play Day”.

“We expected a fast and easy route,” said Jooste.

“With regard to difficulty, on a scale of one to 10, this stage was definitely a seven or an eight but the single track was unbelievable.”

Day said the pace had been fast from the outset and that one of the lead group had taken a wrong turn after 20km.

“You can’t just ride Wines2Whales. You have to navigate at all times.”

Warrick Kernes and Nicolette Griffioen also claimed a second consecutive stage win for Merida in the mixed category in 3:20:30.

“Going into stage three, we’ll try to hold onto the first place position, while enjoying the last day as much as possible.”

The runners-up were Petrus and Yzette Oelofse of Boys and Bikes, while Carla Beyers and Dawie Carstens of Team Ice finished third.

In the women’s race, Michele du Toit and Beverley Wood of Team Fast in Frannies took the stage victory in 4:16:45.

Michelle Zulch and Riana Howlett of Team S-Works were second across the line, while Barbara Mulcahy and Sally Petersen of Team Karoo Sister Power rounded out the podium.