William Mokgopo notched up his first victory as a professional mountain biker when he won the 947 Cycle Challenge in Johannesburg on Sunday. 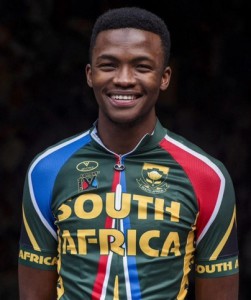 The visibly ecstatic Kargo Pro rider punched the air and shouted as he crossed the line at at Riversands Commercial Park to claim the 55km title in 2:02:12.

Former masters world cross-country champion Nico Pfitzenmaier of Dorma-Pyga chased hard on his wheel but had to settle for second place.

“I’ve wanted to win this race for four years; two years ago I got third,” said Mokgopo, who recently also represented South Africa at the UCI MTB World Championships.

“To win in what is my ‘hood’ makes it even more special,” said the former Diepsloot Mountainbike Academy rider.

“It has been a hard season, but this is the perfect race for me,” said Schoeman, who last won the mountain bike event in 2013.

“I knew I had to go as hard as I could from the gun, and that worked. I’m still a roadie at heart and there were bits that made the roadie and MTB rider in me happy.”

NEXT ARTICLE | Van Niekerk sprints to Cycle in the City win