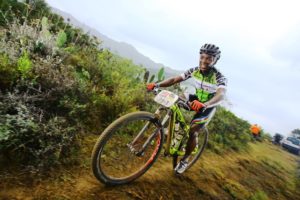 Madolo, who hails from Khayamandi in Stellenbosch, has completed four Cape Epics, with his best finish being 30th overall in the men’s category in 2014.

The 25-year-old first met Sauser through the Swiss rider’s songo.info charity and quickly became his protégé.

“Christoph is a good friend, coach and mentor to me,” said Madolo, who has represented SA at marathon worlds.

“I look up to him and racing the 2016 Epic with him is definitely a great opportunity for me.”

Sauser said his teammate was a determined individual who was not afraid to work hard and chase his goals.

“He is fast on the bike and smart off it. He has finished his studies and is now playing a major role in our programme.”

Madolo said Sauser was still strong and hungry for racing and he was looking forward to riding with him.

“He is retired but still can make your life difficult on the bike. To do the race with him is a huge pressure already and if I have to be realistic he will still be one of the strongest riders in the race, which is good motivation for me to train even harder.”