Five-time Absa Cape Epic winner Christoph Sauser will return to his beloved race next year, this time as a fun rider alongside an as yet unnamed Songo.info development cyclist. 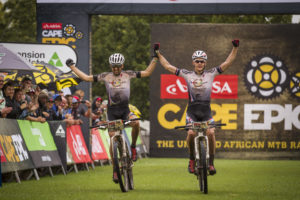 Sauser, a former cross-country world champion, officially retired from professional mountain biking this year after taking a memorable Cape Epic win with Jaroslav Kulhavy and reflected on his special relationship with the race.

“This was the coolest thing in the world with all these spectators cheering us on. These moments are very rare,” said the three-time marathon world champion and Olympic bronze medallist.

“With five kilometres to go I knew that we had it. I tried to absorb as much of it as I could, and thought about all the memories this race has given me.”

The Epic bug first bit the Swiss champ back in 2005, when he finished in the runner-up spot beside Fredrik Kessiakoff.

He returned the following year for his maiden win with fellow countryman Silvio Bundi, setting an as yet unbettered victory margin of 29 minutes.

After an unsuccessful 2007 event, he teamed up with Burry Stander to form one of the strongest pairings in the race’s history, although they would not take the win due to various unfortunate circumstances until 2011.

They repeated that victory in 2012 and looked on course for a third when Stander was tragically killed by a taxi while out on a training ride on January 3, 2013.

Determined to “win it for Burry”, Sauser signed up former Olympic champion Kulhavy, and together they took an emphatic and emotional victory in tribute three months later.

After a failed 2014 attempt with Frantisek Rabon, Sauser reunited with Kulhavy to clinch his final title.

“It’ll probably be a long time before we see such a complete rider at the race again,” said race founder Kevin Vermaak.

“He in no small way made the racing what is it today, and in many ways he was more than that.”