Punctures played a huge part in the outcome of the men’s and mixed sections on the 93km fourth stage of the 900km Old Mutual joBerg2c that finished at Emseni outside Winterton, KwaZulu-Natal, today. 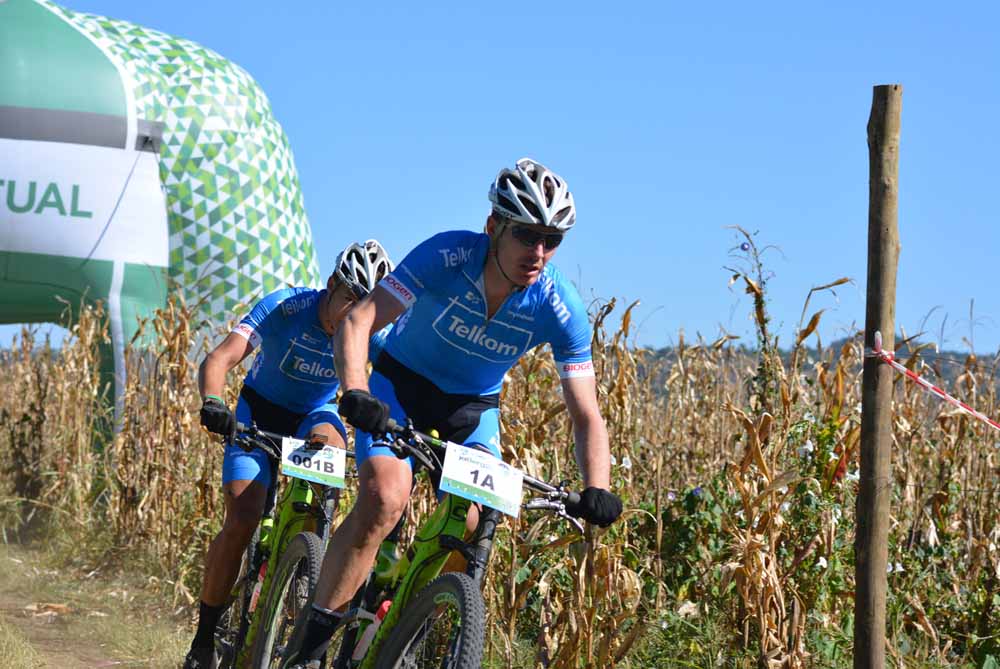 Men’s leaders Johann Rabie and HB Kruger, who left Sterkfontein Dam with a one second advantage, were able to extend their lead to more than three-and-a-half minutes after NAD Pro’s Gawie Combrinck and Nico Bell cut a tyre.

The Telkom duo won the stage, which culminated in a maize field, in 3:03:14. Combrinck and Bell limped home in 3:06:55, with Altech-Karan Beef’s Pieter Seyffert and Hanco Kachelhoffer finishing third in 3:12:13.

The field were faced with a spine-tingling drop off the escarpment as they raced into KwaZulu-Natal via the Great Wall My China and Sollie’s Folly single-track descents.

“They (Combrinck and Bell) went very fast on the downhill and I think they cut a tyre there,” said Rabie.

“They were about 10 seconds ahead of us at that point as we decided to take it slightly easier on the technical sections.

“At the bottom we caught them and then I saw Gawie’s wheel was busy deflating.

“Gawie stopped to plug the leak and we just maintained a steady tempo. The gap remained very constant for a while – we could see them about 30 to 40 seconds behind us.”

Rabie said they then went flat-out over the final 20km and were able to open up the lead.

The stage was won by Dorma-USN-Purefit’s Darren Lill and Candice Neethling in 3:24:15 (16:17:30), who consolidated their third place in the process.

Valencia-Lanham-Love’s Grant Usher and Amy McDougall were a close second in 3:25:16 (16:01:12) to retake the lead they had lost the previous day.

Lill, who won the three-day Berg and Bush alongside Neethling in the same area last year, said she was struggling on days two and three.

“I think it was the altitude more than anything else. Fortunately, we knew we were going to drop off the escarpment today and come a bit lower.”

He said they wanted to be in a good position heading into the single-track before the big descent.

“We worked pretty hard to stay with the front men’s group actually. We managed to get to the downhill section ahead of the other mixed teams and got to ride our own pace all the way to the line.”