After yesterday’s disappointment, Johann Rabie and HB Kruger fought back to win the seventh stage of the Old Mutual joBerg2c mountain bike race outside Ixopo today. 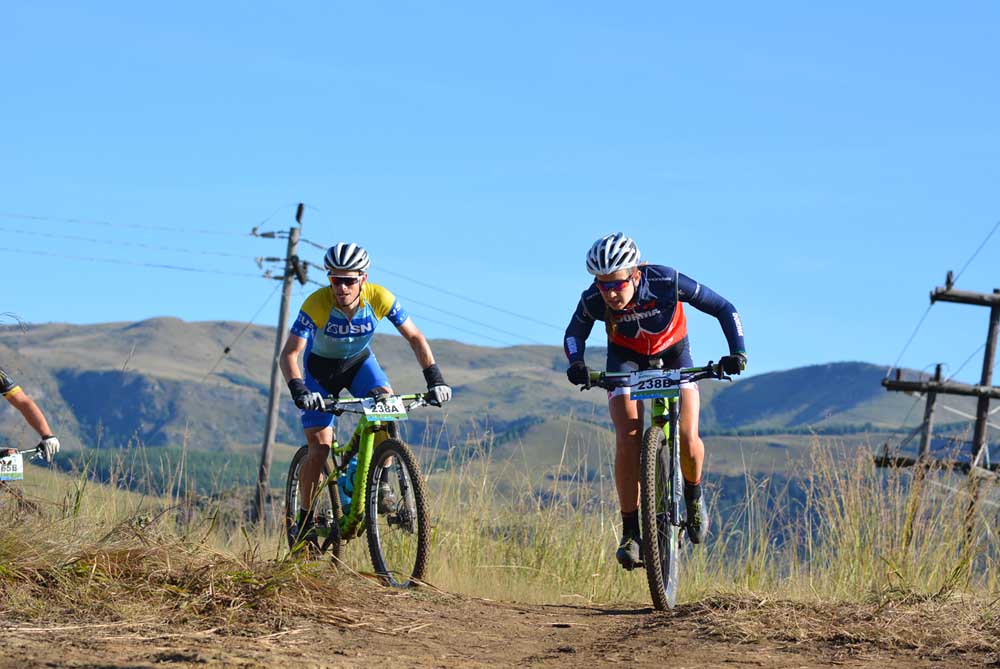 Andrew Hill and Tyronne White of Thule-Pyga-TIB raced to another third-place finish in 3:07:57 (26:41:13) and must be odds-on favourites to finish on the bottom step of the podium on Saturday.

“Yesterday I had one of those days where you feel bad and your legs seize up,” said the 24-year-old Kruger, who lives in Paarl.

“I struggled the whole day to get going and we fought the whole day. But Gawie and Nico were the strongest and definitely deserved to win.”

Kruger, who grew up in Pretoria, said they tried to make it hard on the drags after the start to see whether they could create a situation to make up lost time.

“Gawie and Nico countered us and managed to open a slight gap. So we had to chase and slowly but surely closed it.

“I’m not sure whether they had some trouble in the mud at the bridge, but we caught up with them just after the first waterpoint and from there we rode together.

“At the finish it was a case of getting our position right and going flat-out to the line and luckily we could take the win.”

Kruger said it dragged all the way to the finish and they knew it would be difficult to come from behind in the sprint.

“After seven days of racing we are probably getting slower, but it is definitely becoming harder.”

He said the race was never won or lost before it reached the beach at Scottburgh after nine days and that they had not lost heart.

Darren Lill and Candice Neethling, from Dorma-USN-Purefit, continued their relentless march to the top of the Lanham-Love Attorneys mixed category after winning their third stage in 3:14:26 (28:02:24).

Former leaders Grant Usher and Amy McDougall, riding for Valencia-Lanham-Love, had another solid day in the saddle to place second in 3:21:28 (28:10:07).

The overall leaders, Johan Labuschagne and Catherine Williamson of The Bicycle Company-Bestmed, looked the worst of the contenders when they finished in 3:22:06 (27:54:42).

“There have been some changes to the route, but I think the changes suited us.

“The more single-track, the better for Candice. She is possibly a bit better on those sections than the other girls and is in essence getting free time there.”

As in previous stages, their strategy was to stay with the front bunch for as long as possible.

“There was a tough drag before the first single-track and we knew if we could hang onto the leading men it would aid us quite a bit – and we were able to do so.

Lill, a former national road champion who lives in Cape Town, said racing in the mixed category was all about managing the lady.

“I tried to look after Candice as much as possible and she rode like a star. She bombed all the single-tracks.

“We were able to make up good ground on a relatively short stage and there is at least one very tough day to come. We’re definitely going for the win.”

The 34-year-old Williamson, who is trying to add a mixed title to her wins in the women’s section, said she had been battling over the past two days.

“Every time it goes uphill, I’ve been struggling. I think we went a bit hard in the first half of the race and are now paying for it.”

The penultimate stage of the 900km race will take riders over 99km to Jolivet in the Highflats region.