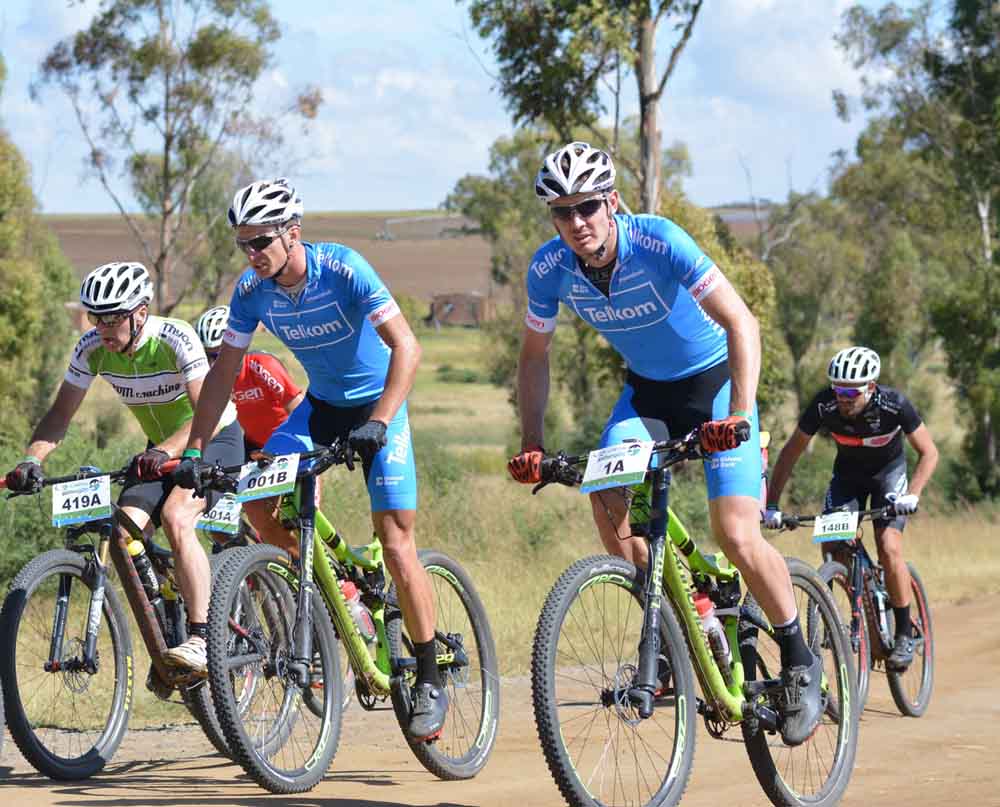 The nine-day event started at Karan Beef in Heidelberg, Gauteng, and took riders over 116km to the Free State town of Frankfort.

Rabie, who is targeting a third title, said the opening day was always about riding at a manageable pace.

“I would say we go at about 60 to 65 per cent of our maximum heartrate. It is about taking easy, but not too easy.

“It adds a nice dynamic to start the tour like this. It is a long event, so it is quite nice.

“There is plenty of racing to come, so I guess there is no need to race too hard on the first day.”

The 29-year-old Team Telkom professional said the start of any stage race was a nervous affair for everyone.

“No one knows how well the other teams are going. It will take two or three days to see where everyone is sitting.”

Rabie said he and Kruger were feeling good after the low pressure start.

Having done the event twice before, he said he’s role would be to give his 26-year-old partner pointers as they went along.

“I know where the important sections are and where to save energy. So I’ll mentor him in that respect.”

Rabie said that although their game plan was to take a conservative approach initially, they would take any opportunity to make up time on their rivals.

“There are a few places that we have in mind to possibly make a move or where there are danger areas.”

He made no bones about the fact that overall victory was what counted and where the glory was.

“We’re not going for stage wins per se, but if it comes it comes.”

Rabie felt his former teammate Gawie Combrinck and Nico Bell were their most dangerous competition.

“Gawie has also won the past two years and Nico is a really strong rider and they are both on really good form.

“Then you have two other teams that you cannot write off in Pieter Seyffert and Hanco Kachelhoffer and Andrew Hill and Tyrone White.”

With the joBerg2c not being the most technical event, Rabie said it suited his riding style.

“I have raced it on two previous occasions and won both times, so I obviously like it.”

He said the race called for powerful riders who could ride well on the flats and not just wait for the climbs and technical sections.

“That’s what joBerg2c is all about. If you have two powerful riders, you can make up a lot of time on the flats.”

Britain’s Catherine Williamson, who is a multiple champion in the women’s section, said she had enjoyed the untimed start.

“My legs don’t respond well on the first day of a stage race and being at altitude there is a limit to how hard I can go anyway,” said the 34-year-old who is bidding to win the Lanham-Love Attorneys mixed section alongside Johan Labuschagne.

“I ride a day like today on feel,” said The Bicycle Company-Bestmed rider.

“You don’t want to spend hours out there but at the same time you don’t really want to hurt your legs too much.”

Williamson said their approach was to make early time gains as soon as the proper racing started.

“It is not always possible, but it is nice to get in the lead and build up a buffer of a few minutes. Then you always have that gap to fall back on if things go wrong.”

However, she said, in a tour of this length it was important to ride your own race.

Labuschagne said mixed racing was all about the lady.

“It is making sure she is always in a good zone, not overextending herself and keeping her safe and out of trouble. That is my role.”

They regarded America’s Sonja Looney and Japan’s Yuki Ikeda along with South Africa’s Darren Lill and Candice Neethling as their main rivals.

Stage two will take the riders from Frankfort to Reitz, a distance of 93km.