World champion Peter Sagan took the yellow jersey when he won the second stage of the 2016 Tour de France today. 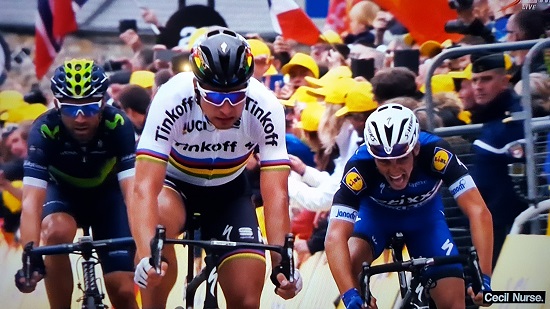 The Slovak, riding for Tinkoff, outdragged France’s Julian Alaphilippe and Spain’s Alejandro Valverde on an uphill finish in Cherbourg after 182km of racing.

Sagan won the stage in 4:20:51 to move into an eight second lead in the overall standings ahead of Alaphilippe and 10 seconds ahead of Valverde.

The pre-stage favourite said afterwards that he was surprised to learn that he had won the stage as he thought two riders had survived the day-long break and that he was sprinting for third.

“It was only afterwards when people told me I had won the stage that I realised I had done so,” said Sagan.

“Roman Kreuziger helped me a lot on the last climb. He was unbelievable, he pulled on the climb until 500m before the finish and then it was just my legs.”

His team-mate, Spain’s former champion Alberto Contador, suffered a second crash in two days and lost some ground to the overall contenders after struggling on the final ramp.

Australia’s Richie Port, racing for BMC, was another favourite that saw his chances for the overall Tour de France title diminishing after puncturing with less than five kilometres to go and losing valuable time.

King of the Mountains

NEXT ARTICLE | Photos of the 2016 Tour de France