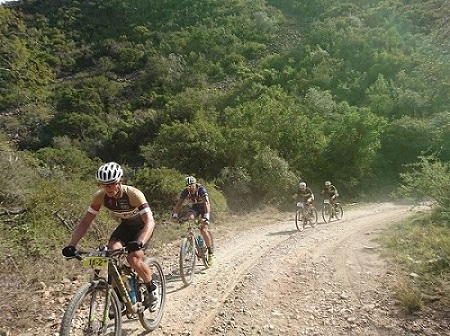 Lourens Luus of PowerBar 1 leads his teammate, Billy Stelling, and the Altech-Autopage duo of Pieter Seyffert and Hanco Kachelhoffer up The Mac at Trans Baviaans. Photo: Seamus Allardice

At the unmarked checkpoint six, Stelling – who was the slightly weaker rider on the day – passed through without stopping while his team-mate handled the formalities.

This allowed Stelling to build a buffer over their closest challengers, Pieter Seyffert and Hanco Kachelhoffer, who had both stopped.

After refueling,  Luus was able to accelerate away and catch up with Stelling.

With Luus driving the pace, Seyffert and Kachelhoffer were unable to make inroads into their lead and eventually settled for second.

The three-man team of Yolandi de Villiers, Johan Labuschagne and Neill Ungerer won the mixed category while Theresa Ralph and Amy McDougall were the first women’s team to cross the line.