Team Dimension Data will compete in the Grand Prix Cyclistes Quebec and Montreal from September 9 to 11.

The team travelled to Canada with an experienced team of riders who have already shown their potential on hilly courses. 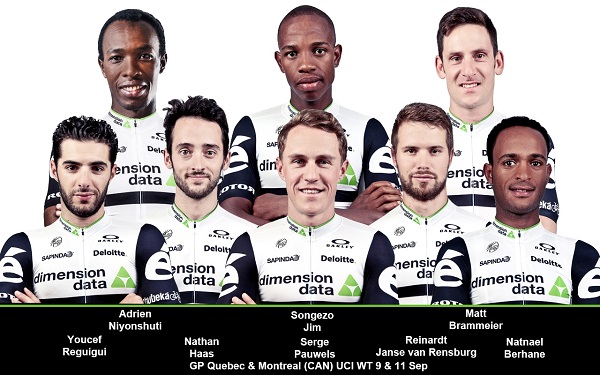 The Team Dimension Data riders will compete in the Grand Prix Cyclistes Quebec and Montreal from September 9 to 11. Photo: Supplied

Serge Pauwels will lead them into the two races, the first of which is the GP Quebec.

Pauwels, who finished second this year on the Mt Ventoux stage of the Tour de France, will be joined by punchy riders Nathan Haas and Natnael Berhane.

Both can certainly handle courses such as the two lumpy city circuits that await the riders in Quebec and Montreal.

Reinardt Janse van Rensburg and Youcef Reguigui will also play vital roles for the team in the final stages.

“Quebec and Montreal are two beautiful and well-organised races. Quebec is more suited for a classic rider like we have in Reinhardt.

“Montreal is more demanding in terms of climbing. I have done both races in the past and I am looking forward to racing in Canada again,” said Pauwels.

Songezo Jim, Adrien Niyonshuti and Matt Brammeier will round out the squad.

Besides Pauwels and Haas, all the riders will make their debuts on Canadian roads.

The GP Quebec will be held on a 12.1km circuit and the riders will tackle the course 16 times, with about 3 000m of climbing.

The GP Montreal covers 3 900m on a circuit that will be ridden 17 times.