South African Nicolas Dougall rode into an impressive 18th place in the elite men’s race at the 2016 Road World Championships which took place in Doha from October 9 to 16. 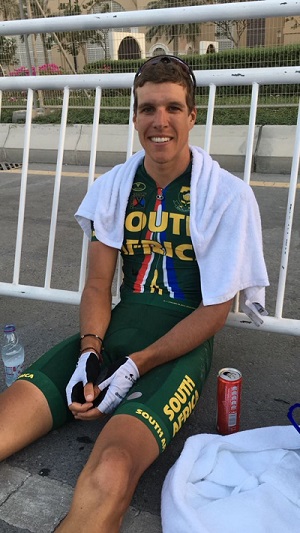 Nicolas Dougall claimed a top 20 position in the elite men’s race at the 2016 Road World Championships in Doha this month. Photo: Dimension Data

“If you had told me two days before the race that I would finish in the top 20, I probably would have laughed you out of the room,” said Dougall.

At the same time Dougall knew that if he could make his way into the early breakaway and get up the road, he could figure in the final reckoning.

“That was always going to be the plan and luckily it worked out,” said Dougall.

The African continent made a big impact in the blue-ribbon event when three African riders made the decisive break early in the race and remained in the lead group until the end.

Dougall said he drank over 20 bottles of water and used 15 stockings of ice throughout the day to cool his temperature.

“We had really great support out on the road from all the South Africa staff. Even the riders from the junior and U23 races were helping to get bottles and ice to me on the course,” he said.

For Stefan de Bod, who rode in the U23 men’s road race and spent some time in the break, the experience was an amazing one.

“The city was quite something to see. I don’t think I have ever seen as many skyscrapers and sports cars in one place,” he said.

Carla Oberholzer took part in the elite women’s race, along with Ashleigh Moolman-Pasio, Heidi Dalton, Anriette Schoeman, Zanele Tshoko and Samantha Sanders, but experienced two punctures, which unfortunately came straight after each other.

NEXT ARTICLE | Boasson Hagen, Farrar, and Anton to stay on with Team DiData