Erik Kleinhans and Matt Beers (Full Sus/Topeak Ergon/Red-E) took the honours in the 94km stage four of the Cape Pioneer Trek in the Karoo yesterday.

Kleinhans and Beers clocked a winning time of 3:23:35. They were followed home 2:39 later by the Swiss/German pair of Konny Looser and Daniel Gathof, who out-dashed Team Spur’s James Reid and Julian Jessop for the runners-up spot. 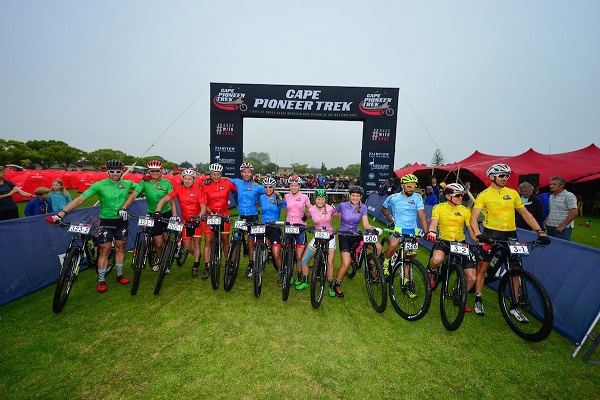 The category leaders pose for the media prior to the start of stage four of the Cape Pioneer Trek on Thursday. Photo: www.zcmc.co.za

Gawie Combrinck and Nico Bell (NAD Pro) finished 7:16 down, leaving a noticeable dent in the 10-plus-minute lead they held at the start of the day.

They still hold a relatively comfortable 8:05 gap over second-placed Looser and Gathof, with the Dutch pairing of Erik Groen and Jeroen Boelen (Stappenbelt Specialized) back in third at 10:39.

“Erik’s racing experience and knowledge of this event put us at an advantage for sure,” said Beers.

“It was a bit upsetting that we lost so much time on day two, but that’s racing and now we are just making the most of what’s on offer.”

In the women’s race Mariske Strauss and Cherie Redecker (OMX Pro) recorded their fifth stage win, but it required the repair, and subsequent replacement, of Strauss’s tyre to get them across the finish line.