Team Dimension Data are gearing up for the eighth Tour du Rwanda which kicks off tomorrow.

The race starts with a prologue on Sunday and takes in seven undulating road stages before finishing in Kigali next Sunday.

In 2009, the inaugural event took place and the team had Adrien Niyonshuti compete.

Niyonshuti went on to finish third overall and he would be the first of a number of their riders to grace the podium in the years that followed.

“The Tour du Rwanda is a really important race for Team Dimension Data because it is one of the biggest races in Africa. It is part of the UCI African Tour calendar and it has become a great race,” said Niyonshuti.

Jacques Janse van Rensburg was one of the five African riders who formed part of the first ever African registered team that took part in the Tour de France last year, which only underlines the competition in Rwanda.

The 2010 edition of Tour du Rwanda was very good to three of their current World Tour riders, Daniel Teklehaimanot won the overall, Natnael Berhane was second and Reinardt Janse van Rensburg was third.

Racing as MTN-Qhubeka in 2011, Dylan Girdlestone placed third overall and in the African Team’s colours, Louis Meintjes finished second overall during the 2013 edition. 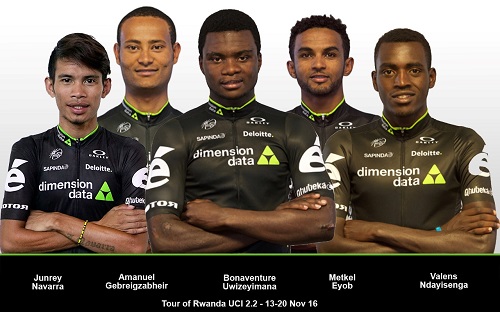 “Even though I can’t race this year I am happy the Dimension Data team is racing,” said Niyonshuti.

“I have been helping them prepare for this race for the last few weeks and they are looking really good.”