The rider from Specialized, who will be gunning for a shot at a sixth title in the Cape Epic in March, was followed home by the Czech Kristian Hynek (Topeak-Ergon) and Germany’s Karl Platt (Team Bulls). 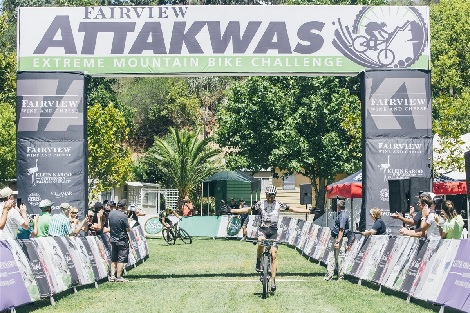 There was some drama for Sauser 29km in when he had a flat tyre and he eventually summitted Son-Op about five minutes behind the leading group.

“I felt very good from the start. But unfortunately I double-flatted and it took four or five minutes to fix it because I ran out of CO2 Bombs and had to pump it,” said Sauser.

“I decided not to change wheels when I got to the tech zone. The spare wheels I had there were quite heavy and I felt too risky for a one-day race, so I just kept going, with the small bit of hope of catching up to fight for the podium.”

At waterpoint two he was 4’06” off the pace, but a clawed his way back to catch the leaders at the 65km mark.

Hynek led Sauser into the finish, but was outdragged by Sauser for the victory.

“Christoph had an impressive ride today. He knew the finish which was a big advantage for him at the end. I’m happy with my second place though. It was a great race and great preparation for the Cape Epic,” said Hynek.

Erik Kleinhans (Topeak Ergon), riding solo for most of the second half of the race, kept his pace steady to finish fourth and the first South African, with HB Kruger (Telkom BCX) rounding out the top five.