The race started fast with Matthys Beukes (Pyga/Euro Steel), back from a long injury layoff, setting a rapid pace.

With a relatively short 73km distance to cover, there was no relenting and sections of challenging singletrack ensured the lead group was quickly whittled down to just 12 by 28km. 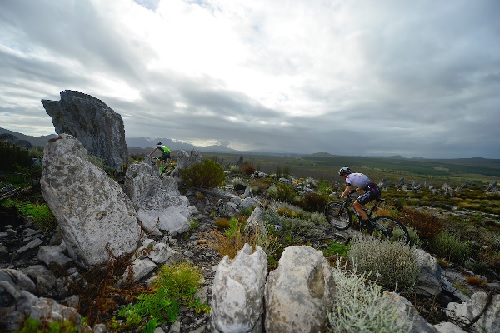 Christoph Sauser hot on the heels of Matthys Beukes in the early stages of the National MTB Series race. Photo: www.zcmc.co.za

On the lower slopes approaching the main climb the 12-rider group splintered, with Hatherly and Beukes riding clear of Sauser and Knox over the summit.

Hatherly snapped up the King of the Mountain prize and when the pair sat up to recover, they were joined by Sauser and Knox.

The quartet began to increase their lead over the field in the second half of the race and on the final climb with 8km remaining Beukes attacked the group getting a small lead, but eventually taking a wrong turn.

Hatherly found the pace a little too much and dropped off near the finish with Sauser and Knox forging clear to battle out a sprint finish.

“It was so different compared to last weekend at Attakwas. I also wasn’t so fresh and I had a hard time from the start, especially my legs. I was more or less on the limit the whole race,” said Sauser.

Langvad made sure she got into the early singletrack sections first, putting all her rivals under pressure.

Swedish marathon champion Jennie Stenerhag (CBC/Abro) and De Groot were in the early mix too, but De Groot dropped off the pace in the second section of singletrack.

Langvad led over the top of the biggest climb of the day to secure the Queen of the Mountain prize, five seconds ahead of Lill and Stenerhag.

But from there on the former three-time marathon world champion began to stretch her lead, eventually crossing the finish line first.

Lill began to falter and faded towards the end, while Stenerhag took a wrong turn, while lying in third place.

De Groot steadily reeled her rivals in and finished second, just under six minutes after Langvad. Süss had also had a steady second half and pulled her way into third place, a further six minutes behind De Groot.

“I was badly positioned going into the second section of singletrack, which was fairly early in the race,” said De Groot.

“Annika attacked going into the singletrack with Candice on her wheel and when the elastic snapped through the rugged singletrack I found myself in fifth place with some big gaps, having to work my way up the field again.”

The National MTB Series moves to Mpumalanga for round two on February 18 and 19. It will be the first of the new two-day stage-race format.

NEXT ARTICLE | Tour of Good Hope entries close on Friday