A meeting between two of South African cycling’s foremost race organisers has opened new avenues for mountain bike enthusiasts with the Liberty Encounter Series firmly established on the race calendar.

The brainchild of ASG Events chief executive Wynand de Villiers and MTB Adventures boss Johan Kriegler, the multi-stage races in the Winelands (April 21 to 23) and the Waterberg (June 9 to 11) have developed into must-do events.

With 17 years’ experience in the cycling business, De Villiers said he was amazed when he moved to Paarl several years ago to find that a region so well suited to mountain biking did not offer any multi-stage races. 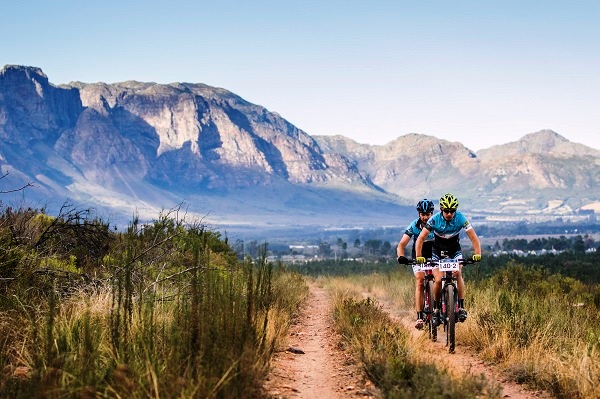 Mountain bikers will face exciting trails with spectacular backdrops when they compete in the multi-stage Liberty Winelands Encounter in April. Photo: Ewald Sadie

Having always wanted to set something up for ASG, he said he had started to develop an idea when he was introduced to Kriegler by former South Africa road champion Hans Degenaar.

“We immediately hit it off and it seemed like destiny because we both were thinking along the same lines,” said De Villiers.

Kriegler, who had made a name for himself as a mountain bike aficionado by creating the Wines2Whales race, quickly confirmed his support for De Villiers’s concept and the pair began to work together.

“With both parties’ experience in presenting cycling events it was a partnership made in heaven,” said De Villiers.

“His experience with Wines2Whales was of exceptional value for us to set up the Winelands Encounter without making silly mistakes in the forming years.”

Initially, De Villiers said they decided to ride the Winelands Encounter with friends just to test the waters.

“But when we sent out some media on our pioneering effort, Johan was almost immediately contacted by Liberty, who wanted to be involved from the start.”

Five weeks before the ride, De Villiers said they suddenly had to fast track their efforts to present a proper stage race offering.

“In the first year the venues worked really nicely, but we weren’t even close to presenting the route experience we wanted.

“Three years later it’s a different picture and the route has lots of purpose-built trails, plenty of fast single-track and bridges. It can compete with any of its counterparts.”

De Villiers he felt their strengths complemented each other.

“My strong point is around the positioning and marketing of the events, while Johan doesn’t have his equal when it comes to planning and creating mountain bike routes.”

Kriegler, who has been involved in mountain biking for three decades, said their relationship worked extremely well.

“We explored many routes in the Winelands in the early days and organised one of the first mountain bike events in the Cape – the Vergelegen Classic – as a church fundraiser,” he said.

He added that De Villiers had opened his eyes to even more possibilities.

“As a Gauteng expat, Wynand saw the beauty and potential of the Winelands region,” he said.

“I, being born and bred in Stellenbosch, had become beauty blind. He convinced me and healed my eyes.”

The feedback from riders had confirmed they were on the right track, said De Villiers.

“We have only received good feedback and the testimonials on our event site reflect this.

“We’re almost full for the Winelands Encounter and I have no doubt the series will go from strength to strength.”