Bianca Holtzkampf took the victory in the 35-39 time trial at the SA National Road and Para-cycling Championships in Wellington yesterday.

The win came after three years of taking the second spot behind Desray Sebregts. 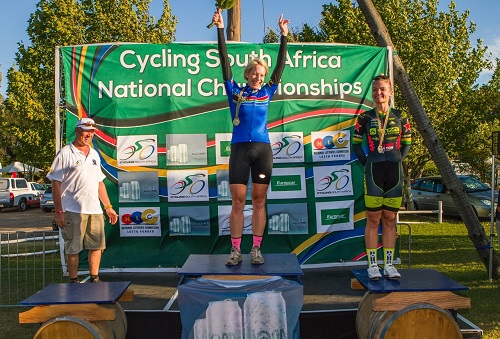 Bianca Holtzkampf took the victory in the women’s 35-39 time trial ahead of Desray Sebregts at day two of the 2017 SA National Road Championships in Wellington. Photo: Double ST

“It’s such an incredible feeling. Desray is a phenomenal rider, and after three years of trying to get up on the top step, I finally did it,” said Holtzkampf.

The fastest woman on two wheels overall was Cashandra Slingerland, who claimed the top podium position in the women’s 40-44 category close to five minutes over second placed Elfriede Wolfhaardt.

Eulali van der Vyver held her composure to secure the women’s 30-34 title ahead of Engela Conradie, while Jodi Zulberg claimed the women’s 45-49 victory.

Charles Nienaber was victorious in the men’s 55-59 time trial, while Paul Furbank stamped his authority in the men’s 60-64 race.