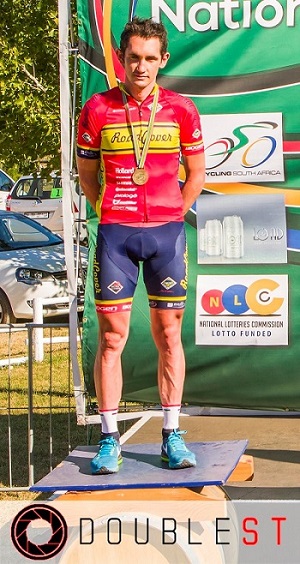 The RoadCover rider completed the race in 3:45:54, while Arham Brhane Meron and Ahmed Amine Galdoune secured second and third.

Smit, who set the fourth fastest time overall in the time trial on Thursday, had said prior to the road race that he felt confident and that he was part of the strongest SA team at a Continental Championship event.

“But the car managed to get him sorted straight away, and off he went. It was at the last corner where he began his sprint – 500m to go he just rode away,” said Boshoff.

A few of Smit’s 2016 victories include the Bestmed Satellite Classic and the Bestmed Jock Tour.

Audio: Listen to what Smit has to say about his win.

In the women’s race Aurelie Halbwachs kept her front wheel ahead and crossed the line first to claim the gold medal along the 99km course in 2:47:53.

Halbwachs was closely followed by compatriot Kimberley Le Court, while South African Charlene Du Preez rounded out the podium, claiming a bronze medal in the process.

“The girls tried hard to split the race up a number of times. Carla, Juanita and An-Li were so great at this. An-Li then unfortunately punctured, twice, and we then had to put her onto a ten-speed wheel, which ultimately took her out of the sprint,” said Boshoff.

Kachelhoffer finished in the top ten, crossing the line in eighth place.

“The sprint in the end is always going to be a gamble, and the two Mauritians almost went discreetly unnoticed until the very end, making it quite an easy race for themselves. Charlene rode like a champ to finish in third place.”

Team South Africa concluded this event with an overall medal tally of five.