The main objective for Kotze, a Cape Town lawyer, and Bronkhorst, who heads the Namgear cycling equipment company, will be to raise awareness of MND.

“Most people, of course, know of Joost and when they see the J9 Foundation logo on our kit, they are always interested to talk about it,” said the 35-year-old Kotze from Bellville. 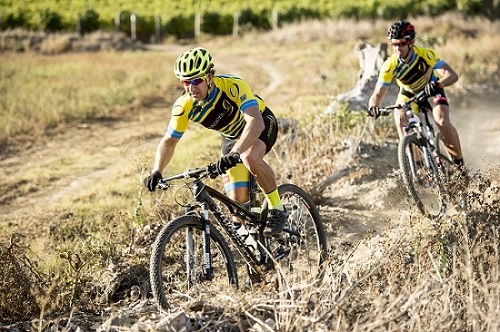 “It gives us a chance to spread the word and to inform people who do not know much about it what the foundation is all about.”

The J9 Foundation was formed by the 1995 World Cup-winning star after he was diagnosed with MND in early 2011 and aims to assist those who have the disease, as well as with MND research.

“The foundation have 29 beneficiaries and care for over 40 families who are affected by MND,” said Kotze.

Kotze has represented the J9 Foundation in a number of races in the last three years, including the Cape Epic, with their focus on creating awareness of MND rather than raising funds.

“However, we do have a snapscan logo on our left arm and anybody who wants to donate some money can do so by scanning the code with their cellphone.”

After taking up mountain biking in 2013, Kotze said he and regular partner Brendan Snyman decided they wanted to ride for something more meaningful than just competing when they gained an entry into the 2014 Cape Epic.

“It was then that I saw an interview with Joost on Carte Blanche and decided to contact his foundation.”

Kotze said the J9 Foundation were enthusiastic about his idea and they formed the J9 cycling team to assist with the work of raising awareness.

Since then he, in partnership with Snyman and Jaco Geldenhuys, has done the Wines2Whales three times, along with several other three-day and marathon races.

He said Bronkhorst had been keen to join him for the Winelands Encounter because he had a friend who suffered from MND.

The Winelands Encounter will take riders through the Western Cape towns of Stellenbosch, Franschhoek and Wellington.