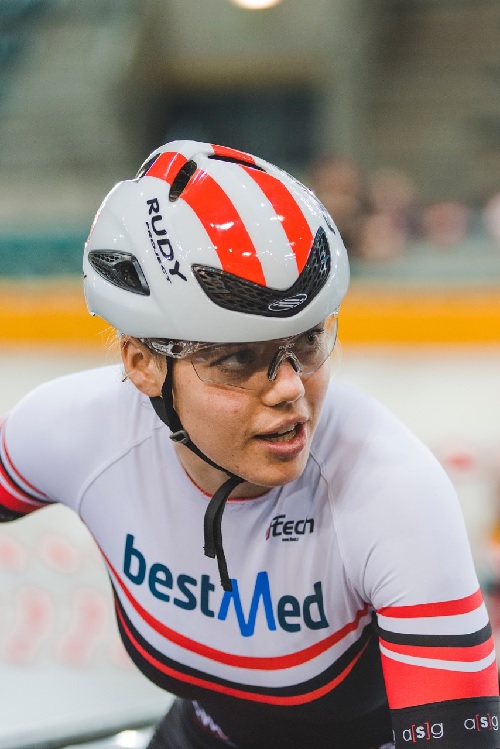 “I’m very happy with my sprint,” she said, after beating Jennifer Abbot who was a massive competitor for her at African Continental Champs two weeks ago.

“We know each other’s riding styles quite well. I took her two times in the sprint so I got the gold for that and I’m very happy,” said Beyers.

“It’s not the event I specialise in because it’s an endurance race, but I am trying to ride every race possible for SA Champs just to be there for the girls, because there aren’t a lot of women in these races,” said Beyers.

Another event on her roster is the 1 500m, as well as the points race.

“I won the points race at the African Continental Champs but that was an absolute surprise for me,” said Beyers.

She added that her win was due to the fact that her competitors had raced the omnium event the day before.

“This time around there will much fresher legs out on the track so it should be really good competition.”

The evening wrapped up with the junior women and elite women’s points race, which saw Courtney Smith and Beyers add another gold medal to their medal haul of the week so far in the junior and elite races respectively.

The elite men’s sprint race was won by Jean Smith with Gadi Chait and Matthew de Freitas in second and third.

Gert Fouche claimed the elite men’s individual pursuit title, an event he had focussed on and trained very hard for.

“After qualifying the fastest, I raced in the final against Josh van Wyk and I managed to catch him,” said Fouche.

“I was very happy with my performance, especially against some of the younger guys, with myself being a master.

“The organisers allowed me to race in the elite category this year and I wanted to see if I could raise my own bar a little bit, especially focusing on World Champs later on this year. It has been was a very good start to the week,” Fouche said.

The elite men team pursuit was closely contested when Team VWE grabbed the title ahead of Team Giant by less than a second.

NEXT ARTICLE | Janse van Rensburg in form for Scheldeprijs