Defending champion Chris Wolhuter admits he is facing strong competition as he chases his third title in a row at the Liberty Winelands Encounter mountain bike race starting in Stellenbosch tomorrow.

The 28-year-old Capetonian, who won with Craig Boyes last year, will this time partner Dylan Rebello in the three-day race as he sets about trying to retain the title.

“It is definitely a goal for us, but the opposition is getting stronger with each event,” said the Imbuko Wines rider.

Among his main rivals will be accomplished mountain bike exponents like Waylon Woolcock and HB Kruger, along with Andrew Hill and Marco Joubert. 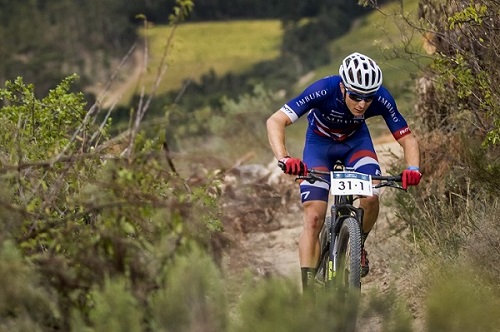 Chris Wolhuter, who will be riding for Imbuko Wines with Dylan Rebello, will be aiming for his third straight title at the Liberty Winelands Encounter, in partnership with STANLIB, this weekend. Photo: Ewald Sadie

With prize-money of R100 000 on offer, Wolhuter, who lives in Wynberg, said there had been a significant increase in the strength of the teams.

“The entry has definitely grown each year and the prize-money is an attraction because it raises the general level of the race in all aspects.”

Wolhuter and the Stellenbosch-based Rebello, his teammate for almost a year, competed in the Cape Epic last month but he said they had recovered well to challenge for the Winelands title.

“Often when you have had good rest you can bounce quite well off it, but this will obviously be our first real test since the Epic.”

Feeling that the format of the Liberty Winelands Encounter, in partnership with STANLIB, suited his riding style, Wolhuter said he was looking forward to the race.

“The multi-stage events require a different skill set and I do tend to get a bit stronger as the races go on.”

He added that the race – which plays out in the Franschhoek, Paarl and Wellington areas – was a major attraction for riders in the Western Cape given its location and superior experience offered by the organisers.

“Besides being so close to Cape Town, they have done a lot of work on the course and you could see a significant improvement in the trails last year.

“Off the bike, they create a five-star experience so it’s always one to remember.”