Setting the pace from the start, Waylon Woolcock and HB Kruger took control of the three-day Liberty Winelands Encounter by winning the opening stage from Stellenbosch to Franschhoek today.

Breaking away from their rivals at the midway stage, the BCX riders crossed the finish line first, covering the 54km stage in 2:11:39.

The pair, riding the race for the first time but familiar with the trails in the region, laid down a marker up the first climb out of Stellenbosch. 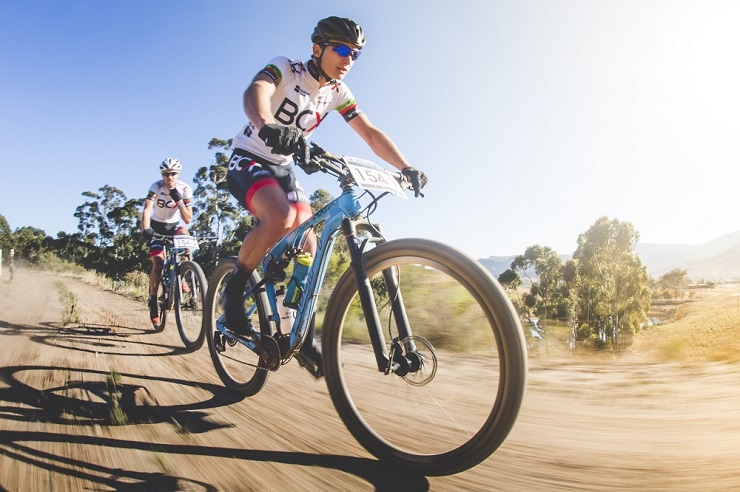 Waylon Woolcock and HB Kruger (front), riding for BCX, set the pace on the opening day of the Liberty Winelands Encounter, in partnership with STANLIB, from Stellenbosch to Franschhoek today. Photo: Ewald Sadie

“We knew we had to make an effort on the first climb, which is a section I know very well,” said Woolcock, who lives in Stellenbosch.

He said the dry conditions made the route tricky at certain stages.

“When I did lose a bit of concentration I had a slight front wheel drift and ‘bought a small plot’, but no major damage was done and I was able to fix the problem on the fly.”

After the early climb, Woolcock said Uys and Carstens came back at them, something the third-placed pair repeated after the leaders made a surge on a second ascent.

“But I knew they were putting in a big effort and riding five per cent harder just to get back to us. We were riding tempo and actually saving energy.

“Once we exited Boschendal on the mountain side, they held on for a few kilometres before we broke away again and kept the gap until the end.”

Woolcock said Kruger also had a “little play in the dust” but from then on they rode at an even pace and tried to avoid any serious crashes or mechanicals.

Despite their three-minute lead, Woolcock said they would not be thinking too far ahead, particularly given the quality of the opposition.

“We can’t relax at any stage and our opponents will take advantage of any mistakes. You can never count anything out in mountain biking.” 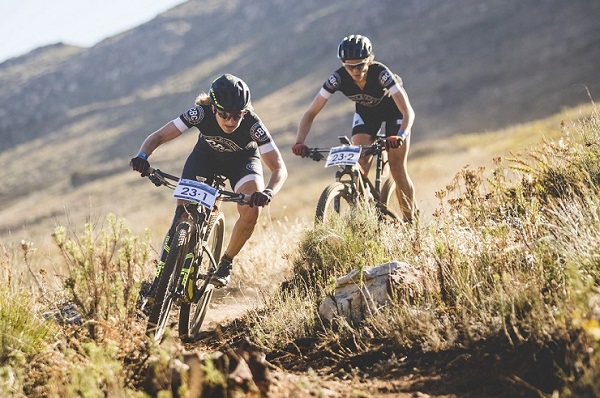 This gives them a sizeable lead over Jana Kruger and Ilse Viljoen (Companero), who filled second spot in 3:07:51.

The mixed category is led by Corne Barnard and Vera Adrian (dormakaba RA), who finished the stage in 2:27:15, followed by Matthew Stamatis and Carmen Buchacher (Home Ice Cream) in 2:31:51.

Tomorrow’s second stage will cover a distance of 54km from Franschhoek to Wellington.