Tom Dumoulin put in a strong time trial performance in the final stage of the 2017 Giro d’Italia, to take the Maglia Rosa.

With the four top riders within one minute of each other for the Maglia Rosa ahead of the final, the Dutchman was always the favourite, and he didn’t disappoint. 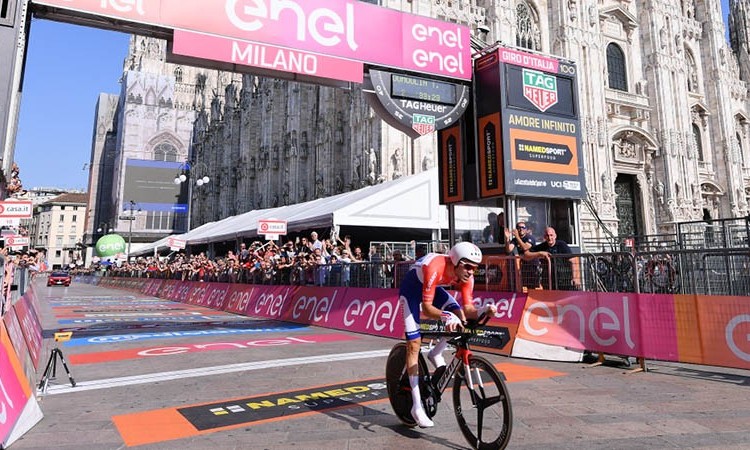 Tom Dumoulin of Sunweb is the winner of Giro 100! Photo: LaPresse

Dumoulin said ahead of the stage that he was actually quite happy not to be in pink on this stage as he could wear his tried and tested skin suit, which could provide some vital seconds.

Van Emden was very emotional at the finish.

“I’m so happy so emotional. I was too may times second and this is a great day for Dutch cycling. Tom wins, I win, finally. There are two really happy people inside this tent.”

“It’s great, it’s really crazy. I cannot describe it with words it’s incredible. It was such a nerve wracking day. I was super nervous from the beginning and I needed to stay calm but I almost couldn’t. I had good legs and I just went for it.

“I spoke to my sports director and he said only if we’re sure I’ll tell you not to take risks in the corners. He said it at halfway already. I was like, this is early to say something like that. Then I crossed the line and they were saying you’ve won it but then I sat here in front of the TV and it was only like three seconds. I was really angry but I eventually pulled it off. It’s incredible.”

Dumoulin’s teammate Laurens ten Dam, one of the most experienced riders in the bunch, had a lot of praise for his leader.

“It’s great. The first time I won the Giro d’Italia (with a team) I was with Menchov. I was one of the young guys in the team and now I’m by far the oldest. I was in the US in the winter and I saw the parcours of the Giro and I was immediately texting with Tom about TTs and I said you have to do the Giro. Then I was beginning to doubt because every week there was another contender, Quintana was going to do it, Nibali, Aru all those guys. I thought maybe it was better to do the Tour de France.

“In the end we had a big discussion and we said that we have to go for it to try for the GC first time. He impressed me so much in the mountains this year. I knew that he was going to do great TTs but on Blockhaus on Oropa, even on a bad day he was able to limit his losses without Wilco. With Wilco he would have been in the jersey today already. As a team we showed ourselves. I’m so proud of the boys and especially Tom.”