Nairo Quintana took the win in 3:44:51 on stage nine of Giro d’Italia, which started in Montenero de Bisaccia and included the second summit finish of the race, today. 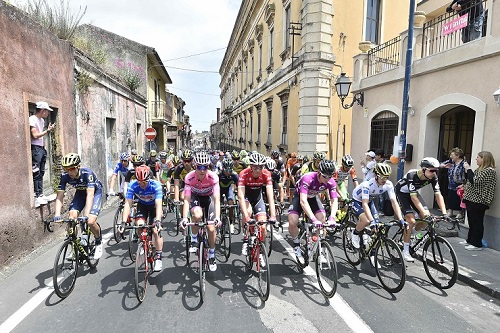 Quick-Step Floors’s Bob Jungels lost the maglia rosa to stage winner Quintana when he was dropped on the early slopes of the climb. Pinot and Dumoulin are in second and third overall respectively.

“I’m happy. It went just as we initially planned it as a team,” said Quintana.

“We’ve prepared for the Giro very well. Some of our guys have had a few muscular problems but they’ve recovered. I’m also happy with the advantage I got today over rivals who are very strong and time trial specialists.”

This was the first time the Blockhaus, a 13.65km haul to the finish, was tackled from this side. It is 1 665m above sea level and was the only climb on the stage. The rest of the day was a straightforward 149km trek through Abruzzo from Montenero di Bisaccia.

With about 15km left, a police motorbike took out a huge swathe of the peloton, which included two Sky riders – Geraint Thomas and Mikel Landa Meana.

The motorbike was stopped on the side of the road and Sunweb’s Wilco Kelderman clipped the bike and crashed into the middle of the Sky train.

Shortly after there was another motorbike incident. No one was seriously injured but these accidents have a huge impact on the outcome of the race.

The new overall leader attacked several times on the ascent, and although Pinot and Bahrain Merida’s Vincenzo Nibali were able to hold during several initial surges, both were powerless when Quintana accelerated away with around 5km to go.

“I’d like to retain the Maglia Rosa as long as I can. We have the team to defend it. Tom surprised me today by how well he went but many of my rivals are strong so I’ll have to pay a lot of attention, particularly in the last week.”