The 27-year-old Dutch took the honours from Russia’s Ilnur Zakarin (Katusha–Alpecin) and Spain’s Mikel Landa (Team Sky) when he finished the 131km stage from Castellania in 3:02:03. 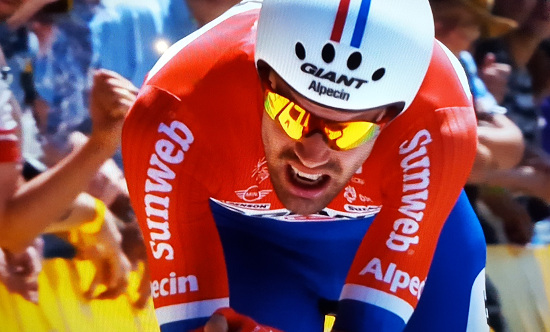 Movistar’s Nairo Quintana and Dumoulin, together with Zakarin and Landa rode up the final kilometre with Quintana slowly dropping back. Within the final few hundred meters, Zakarin moved to the front, but Dumoulin managed to pass him and take win.

“It was very hard but I was always with my focus and I was quite relaxed,” said Dumoulin.

“I couldn’t follow the first attack from Quintana earlier in the race, so I had to follow my own pace a little bit.

“I came closer and closer, and in the end I still had something left for the finish. It was incredible.”

Dumoulin now leads the general classification with an overall time of 59:31:17. He is followed by Quintana and FDJ’s Thibaut Pinot.